Coming Out Of The Dark With The People Of Eigg 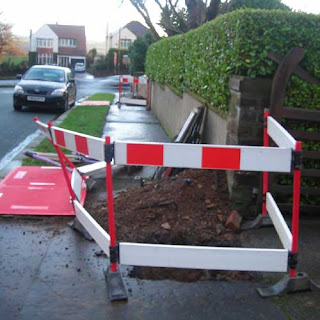 It was like one of those historical reality shows. You know the kind of thing : you send some poor family to live their lives in a eighteenth century hovel with nothing but the things a typical eighteenth century hovel-dweller would have access to. In our case the experiment had been designed for us by the Yorkshire Electricity Board. Someone from their Research and Promotions Department must have had the thought - following a half-decent lunch - what would happen to a typical family if you deprived them of electricity in the middle of a blizzard. The result of this unique experiment I can now announce - you go stir crazy.

At 1.20pm yesterday all the power to our house failed. At first I thought it was a generalised power cut due to the stormy weather outside. But with a falling heart I noticed that John and Chris opposite had their lights on as did Terry next door. As suggested in my copy of "The Readers' Digest Introductory Guide To Being A Real Man" I checked the trip switches on the fuse box. As far as I could see none of them had tripped. And so I phoned the Electricity Board.

I was, of course, greeted by one of those multiple choice tests especially designed for the hard of hearing. A voice specifically chosen for its lack of clarity gave me a variety of choices in relation to the pressing of keys : "If your house is burning down press one, if you have had a heart attack press two ...", that kind of thing. Unfortunately I could not make out what the choices were and therefore I entered a completely random sequence of numbers and eventually got through to what sounded like a human voice. As far as I knew this could have been some OAP in Slaithwaite, but I explained my problem to them anyway and they said they would send someone around in three to five hours (at least, that's what I thought they said although it might have been that they would send a round tree and five flowers).

I sat in the increasing gloom looking out of the window and at about 3.30pm a chap arrived who looked as though he knew what he was doing. He had a hard hat, a box full of tools and a metre thingy. I must confess I did not ask for ID and he might have been the local con artist, but by now I was getting desperate and didn't all good con artists have torches, in which case I could possibly mug him.

Con artist or not he tapped wires and measured flows (or something like that). He also shook his head frequently and sucked his breath in through his teeth in that worrying way real workmen do. A kind of "wrrrrrrrr" which, of course, means "Oh dear, oh dear, oh dear you have got problems haven't you?". He got in his little van and drove up and down the street. He seemed to stop at a house further up the street for a cup of tea. He walked up and down the drive. He squinted. He scratched his head. By 4.30pm he came back and announced that he would "have to send for the diggers" and, assuring me that these Australian gentlemen would be with me before the night was out, he went on his jolly way. By now the candles had come out and the overcoats had been put on (although the central heating is gas it seemingly relies on electricity to tell it what to do).

By early evening, Isobel and I were sat in candlelight and rapidly exhausting our stock of conversation. Fairly quickly we had determined that practically everything that makes life worth living uses electricity to function. Just think of it .. no lighting, no heating, no television, no computers ... and - worst of all - no dishwasher. At some stage the diggers arrived - they were not Australian but they had shovels - and they began to dig up the pavement outside. Throughout the evening as we tried to improvise - using torches to try and read, putting candles in glasses to multiply the reflection - we would get updates from the diggers. The main cable was ancient. It was not possible to attach a line to it. They had found some live cable lower down the road. They would set up a temporary cable. By 10.30pm we had two large holes in the road outside, a cable snaking across the garden and through a gap into the garage and, most wonderfully, the lights back on.

The repair is only temporary. A team would come to dig up the road. They were 99% certain that would be the next day. So here I sit waiting for them to arrive. Knowing the statistical system utility companies operate, I assume that the "99%" means a one in three chance. So I might be sitting here for some time.

But I amused myself by reading an item on the BBC News website. Residents of the Isle of Eigg in Scotland will today celebrate the opening of their new power supply system which, for the first time, will supply them with 24 hour electric power. As the daylight dims I will raise a glass of Laphroaig in silent salute to my friends on Eigg. I know what you have been through. Together we can come out of the dark.

Email ThisBlogThis!Share to TwitterShare to FacebookShare to Pinterest
Labels: Electricity