The Great Hole Of Fixby : Turn Up, Call By, Drop In 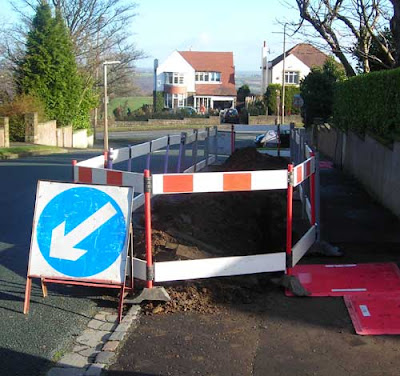 As many a great guru will tell you, spiritual well-being is all about balance and harmony. For every bit of ching there needs to be some chang, for every astral peak there needs to be an astral trough. For every Great Wall of China there has to be a Great Hole of Fixby.
Yorkshire Electricity has decided to lengthen the moat which surrounds our house. It appears that the aim of the exercise has now changed from trying to re-connect us to the mains to searching for a new seam of coal which could single-handedly resurrect the Yorkshire coal mining industry. The piece of cable which is our umbilical cord and which alone separates us from a new dark age still snakes across our lawn and, in the way of such things, is now being incorporated into the natural environment. Birds are nesting in its warming presence and squirrels are gnawing it for its rubber coating. As I write a team of chaps are extending the hole still further and what looks suspiciously like an oil pumping rig has just arrived down the road.
The telephone is still off. British Telecom must have been impressed with the experiment and have now extended it to another 140 homes in the vicinity. As there is a large hole outside our house people are assuming that this mass failure of the telephone system is our fault and rotten fruit and old Bakelite telephone handsets have been thrown at our house.
I have started - in full view of all the street - filling a large number of buckets with water and storing them outside the house. Everyone thinks I know something they don't and have started doing the same. When we called at the local ASDA yesterday they had sold out of buckets. I always remember with fondness my late mother-in-law who once single-handedly started a shortage of salt in the north of England by going to the local shop and buying two dozen packets of salt. When people asked her why she was doing it she just gave them a knowing look and went on her way. Within days the Great Salt Shortage was being reported on Look North. As I fill my buckets from the outside tap I know she would have been proud of me.
at February 07, 2008