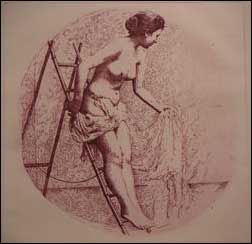 My original thought of the day came to me as I was walking Amy the dog through the Crematorium. It was "are there any original thoughts left in the world?". The origin of this profound thought can be traced back to the artist Titian and his relationship with his model. For some reason I was trying to remember the ending of the limerick which starts : "While Titian was mixing rose madder". Either my wife, Isobel, or JGC (or both) taught me the limerick many years ago and they in their turn were taught it, I believe, by one Professor Goodyear. Why I should suddenly think about all of this one February morning in 2008 I have no idea, but once having thought about it I couldn't get it out of my mind. I searched the recesses of my mind for the rest of the verse but couldn't find it. So, would I be able to find it on the web?. Had the smutty rhymes of Prof G managed to escape from the greatest reference source of all time. As soon as I got home I would Google Titian and Rose Madder and see what came up. What came up, of course, was the rest of the limerick proving, once and for all, there is little original left in the world.
To test out the thesis I decided to try a selection of thoughts in order to see if anyone had had them before. "Can caterpillars cycle backwards?" I wondered. The answer - according to Google - is seemingly that they can. Research published in 1993 in the Journal of Insect Physiology revealed that caterpillars can summersault backwards in a cycle that can last several days. And so it continued : whatever mad thought I had, somebody had travelled the road before and had the same thought. The nearest I came to an original thought after several hours of research was "motorway slush makes you thin in the purple glow of evening". No doubt someone else had the same thought between my Googling it and my getting round to copyrighting it on paper.
Oh and the limerick, you ask? It goes like this :
While Titian was mixing rose madder;
His model reclined on a ladder.
Her position, to Titian, Suggested coition;
So he nipped up the ladder and had 'er.
at February 08, 2008