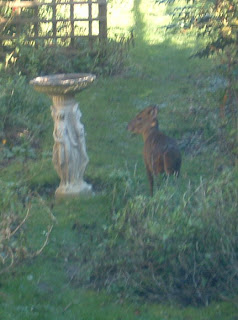 I was sitting at my computer by the window this afternoon, when I saw a largeish brown animal bounding up the garden towards the house. For a moment, I thought it was a fox. Then I realised it had horns. There was a deer in our garden! In nearly 30 years of living here, I've seen the squirrels gradually increase from being a rare sighting, we've had mating hedgehogs grunting in the bushes, baby foxes playing on the shed roof, and any number of interesting birds, but I'd never seen a deer here before.
It was hard to know what to do. The deer didn't look at all frightened or as if it needed rescuing, but stood pensively by the birdbath, gave its bum a little wash, and glanced towards the window, watching me trying to hold the camera steady. I knew the least move would send it off, so I had to resist the temptation to go out and make friends, or invite it in for a cup of tea. I did grow a little concerned when I saw one of our neighbours' leopards eyeing it from behind the trellis.
Eventually the deer bounded off, stalked rather cautiously by Austin, clearly wondering if he had met his match at last, and then reappeared, going in the other direction. Maybe he found his way out, or maybe he (or she) is going to make its home in the suburbs of Oxford and start a herd.
at February 13, 2008