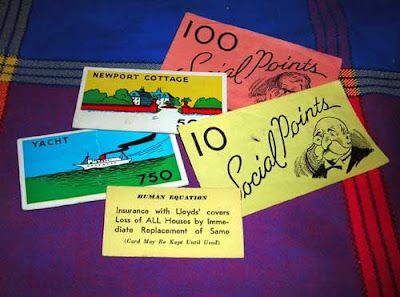 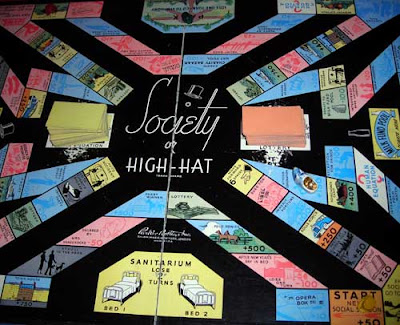 In Oxford, at the weekend, we decided that what was required was a good, old-fashioned board game. Searching Jane's game cupboard we found a beauty - "Society or High Hat". According to the instruction leaflet it was manufactured in 1937 by Parker Brothers who also published Monopoly. In some ways it is like Monopoly : you move symbols around a track and collect things. But instead of collecting money you collect social points and the various challenges and rewards are all concerned with enhancing your social standing. If you land on the right square you win yachts, polo ponies and Riviera mansions. If you land on the wrong squares, various social disasters occur which rob you of your social status. Your daughter may marry a chauffeur or you may be missed off the guest list to a social gathering. The equivalent of going to jail is having to visit a sanitarium. Occasionally you are instructed to give money to a milk fund for poor children but - if you are lucky - you can win it back again before they get their hands on it.
It's the kind of game which could form the basis for a PhD thesis on the social situation in the 1930s. It should be preserved and put on the core curriculum in secondary schools. Attempting to find out a bit of background about the game I looked it up on the web but there are only a couple of references to it. One is a non-functioning link to an auction site, the other is a passing reference which suggests that copies have been auctioned in the past and reached considerable prices. Strangely enough, our game was won by Isobel - the daughter of a mill labourer from Halifax. Just goes to show - the distance between the high hat and the flat cap may not be as great as we imagined.
at February 25, 2008