A Festival Of Postcards - White

The theme for the December Issue of the Blog Carnival "A Festival of Postcards" - which is splendidly edited by the Canadian genealogists and postcard collector, Evelyn Yvonne Theriault - is White. I suppose I could have gone for a festive snow-scene but I decided to concentrate on the amount of white you find on many old postcards. Once the December issue of the Festival is published I will provide a link so that you can explore the many other fascinating interpretations of the theme.
La Seine Au Pont-Neuf 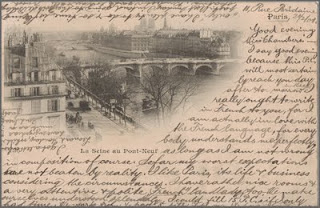 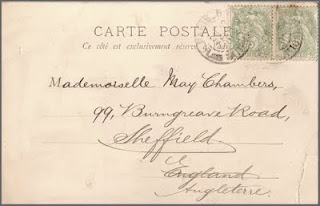 Let me first of all say that although there isn't much white in the above postcard, there once was : it can be forgiven for fading a little in the hundred or so years since it was published. But it wasn't just this early postcard which displayed a lot of white - it was true of all early postcards before the introduction of the "divided back". The pictures - normally black and white photographs - were limited to a small section of the obverse side of the card whilst the remaining white space was used for the message or greeting. The entire reverse of the card - again originally white - was reserved for the address. Thus it was not unusual to find - as is the case in my card above - that the message was ingeniously squeezed into the available space whilst the address could be written with lavish style.
It was the introduction and legitimisation of the divided-back which helped bring about the golden age of postcard collection. The picture could now become dominant on the obverse side whilst there was plenty of space for the message on half of the reverse side. The British postal authorities were the first to approve divided backs (in 1902) and they were followed by France in 1904, Germany in 1905 and the USA in 1907.
The card illustrated above was sent from France in February 1901 to May Chambers who lived in Burngreave Road, Sheffield. I managed to buy a small collection of cards from Miss Chambers' collection about 25 years ago in from a little second-hand shop in Rotherham. According to the 1901 census, May Chambers was a 27 year old school teacher, who lived with her widowed mother and her younger brothers and sisters. Further research - the confluence of postcards and genealogy is a truly fascinating study - suggested that her father was a senior mining engineer in the Yorkshire coalfield. So you have all the ingredients for a perfect postcard mix : you have the black of the coal and the white of the postcard spaces, you have the black of the ink and the pale white of the complexion of the face of young Miss Chambers.
YOU MIGHT ALSO LIKE ........
A FESTIVAL OF POSTCARDS : Take a look at the Festival of Postcards site and perhaps submit your own entry for the December issue.
MY DEAREST MAY : From the NfN archives - more postcards to May Chambers.
at December 04, 2009