Sepia Saturday : Professor Green And A Host Of Admiring Children

I am posting my Sepia Saturday contribution a little early again this week so it acts as a reminder to anyone else who wants to join in. As usual, at the end of the post there is a list of the other Sepia Saturday contributions - if you want your post adding to the list just add a comment and I will update the list throughout the weekend. Before I launch into my sepia post this week, perhaps I should add a few words about the sepia process itself. The term "sepia" was given to a brown pigment used by artists which was derived from the ink sack of the Common European Cuttlefish (Sepia officinalis). When, in the late nineteenth century, a chemical process was developed which converted any remaining metallic silver in photographic prints, to a sulphide - which is much more resistant to breakdown over time and which produced a brown-grey tone - it was called sepia toning. Sepia prints are more resistant to fading and chemical decomposition which is why most of the early prints we can still see are sepia toned ones. 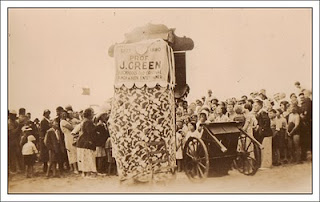 My Sepia Saturday image this week was taken by my Uncle Frank back in the 1930s. It shows a crowd gathered around the tent of a Punch and Judy entertainer on Blackpool sands. The brightly decorated puppeteers' tent proclaims "Established 1880, Prof J Green, Blackpool's Old Original Punch and Judy Entertainer". An article by Robert Leach entitled "Punch and Judy and Oral Tradition" published in the journal "Folklore" (Vol 94:i,1983) tells the story of Professor Green (Punch and Judy puppeteers are traditionally known as Professors). In the early summer of 1880, Jack Green set out to walk from his home in Manchester to Blackpool (some 40 miles in distance) pushing a handcart containing his Punch and Judy booth and puppets. He spent the summer entertaining visitors at the popular seaside resort and settled in the town where he acquired a house and, with his wife, brought up nineteen children. Most of the children followed their father into the Punch and Judy business and, at the time the photograph was taken, there were as many as nine separate Punch and Judy shows being staged by his children at points along Blackpool sands. A third generation of Greens went into the same business and the last Prof Green (a grandson of the original) retired as recently as the 1980s.

One of the most glorious thing about these old sepia prints is the richness of their content. The image above is taken from a scan of a small 3 inch by 2 inch print which was taken at random from one of Uncle Frank's albums. But scanning technology - and the quality of the original print - allows us to delve deeper inside the image and discover new images which have been hiding away for decades. The following image - which is merely an enlargement of just part of the crowd - is a picture in itself, a picture which delightfully captures the excitement and wonder in the faces of the audience. If those children are alive now they will be very old. But their youth was captured forever - in sepia. 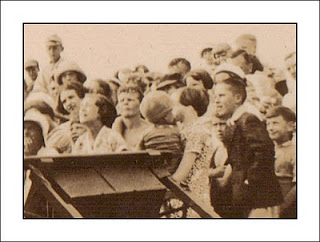