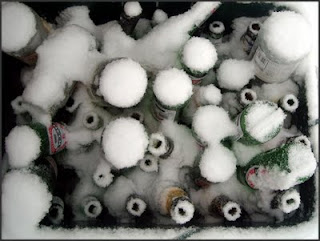 We have an ambivalent attitude towards snow in our household. A bit like Joni Mitchell and her clouds, we tend to view snow from both sides now - depending who is doing the viewing. At one extreme we have The Lad who has a love of snow that could rival Miss Smilla's. Ever since he was small he has welcomed the coming of snow with an excitement that was truly infectious. As he has grown older his obsession with all things wintry does not seem to have abated : a couple of days ago he was playing ice hokey for the University team and in a couple of days time he is off to France for a week's skiing.
I would probably come next on the snow loving scale. Whilst I admit that snow is cold, uncomfortable and disruptive, I have a great visual attraction to it. I love the way it coats things and transforms things, like nature's own highlighting pen. So when the snow falls there is nothing I like more than getting out with my camera and discovering what new insights are to be discovered. Who knows, the recycling bottle box may just be transformed into something you can hang on your wall.
Next on the snow approval scale comes Amy the dog who is often forced to accompany me on my wintry perambulations. She does not accompany me willingly as she is not particularly fond of snow. It disturbs her sense of scent, she tells me, and makes it difficult to chase squirrels. In addition, snow deposits tend to accumulate around her extremely furry paws and quickly build up with the veracity of a giant snowball being rolled down a hill. In the past it has occasionally got so bad that The Lad and I have had to carry her home as the weight of her snow-coated feet has been to great for her to lift.
But the prize for the great snow-hater in our household goes to the Good Lady Wife. She hates snow with a passion that borders on the fanatical. From November onwards she will each morning peep out of the curtained windows to see if her dreaded enemy has arrived. The cupboard next to the door is filled with an array of weapons to fight the beast : dozens of bottles of de-icer, boxes of scrapers, shovels, sheets, heavy-duty gloves and fur hats. It isn't as though we live above the snow-line - at most we might get a week or ten days of snow each year. It is simply that she hates it so much and - in a philosophy of mutual destruction borrowed from the Cold War - believes that a powerful arsenal keeps trouble at bay.
So there we are : finely balanced. We are a hung parliament in our attitude to snow with no floating voter in sight. But who knows, next year things might be different. My nieces' son might be coming to England to University and there is a good chance that he won't be too far away from us. Hopefully he will be able to spend some time with us next winter. He has spent his entire life living in the British Virgin Islands and, as far as I know, has never witnessed snow in his life. It will be interesting to see which side of the great divide he comes down on. 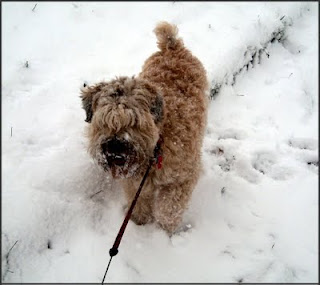 YOU MIGHT ALSO LIKE ......
THEME THURSDAY : See how other Bloggers have approached this week's theme.
WARNING OF SEVERE WEATHER WARNING : From the NfN archives - the British obsession with the weather.
at December 10, 2009