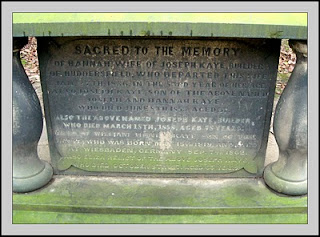 The trouble with history is that it is infectious. Contagious. Bloody dangerous (this is not a descent into gratuitous swearing, it is often bloody and frequently dangerous). Like MRSA or Clostridium difficile you can catch history from almost anything. People you meet shed history like dandruff and history leaches out of old stone walls and blackened brickwork by some powerful osmotic force. The Boy In The Bubble had history:  it braved his defenses, by-passed his air-lock and crept into his very soul. It will get us all eventually : history will have me and history will have you.
Only yesterday I was taking a short-cut through the little park next to Huddersfield Parish Church, on my way to buy a rather splendid brown striped suit I had seen in the sale at Greenwoods, when I brushed against a small stone sarcophagus. I paused to take a photograph of the offending object, and in that brief moment I must have been infected. By the time I got home (complete with suit - pure new wool, £200 reduced to just £60) sepsis had set in. Leaving the suit in the bag, I downloaded the photograph and set about transcribing the inscription.

The problem with an inscription like this is that there is enough to keep you blogging for a month. Who was Joseph? What did he build? Why did his son die in Germany? Why is poor Eliza nothing more than a relict? The questions become what the microbiologists call systemic. They take over your being and they dominate your life. Like an intellectual tsunami they wash away all thoughts of your new suit.

I have begun to gather answers. Joseph Kaye was the most celebrated local builder of his day who was responsible for building two iconic buildings - the Railway Station and the George Hotel - in the centre of Huddersfield. He was a canny operator who is said to have undercut his competitors' tenders for building the Hotel by "liberating" stone from the adjacent railway station that he was already building. He built many of the local mills and ended up owning one or two of them. I have not yet tracked down why his son died in a German health spa but the infection is still in its early days. The fever that is history has a long way to go before it burns itself out. In the meantime my suit is unworn, my dog is unwalked, my dinner is uncooked and my next blog post is unwritten. That's what history does to you.
And a final word of warning. If, by any remote chance, you have not yet been infected by the organism, be very careful. Reading the other Theme Thursday Posts on the subject may just leave you open to contamination.

THEME THURSDAY : Take a look at how other people have interpreted this week's theme. And if you don't already take part, why not join in?

HUDDERSFIELD STATION THEN AND NOW :  Take a look at one of Joseph Kaye's finest buildings, the wonderful Huddersfield Railway Station.