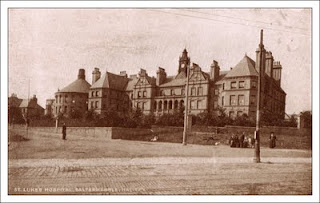 This is a postcard I have just added to my collection and it shows St Luke's Hospital, Halifax. Whilst the name might not be familiar to Halifax residents, the building will be, for it still stands today and is now incorporated into the new Calderdale Royal Hospital. Nevertheless, it stated life in 1897 as The Halifax Union St. Like's Hospital. The "Union" concerned was the "Poor Law Union" and the hospital was built to accomodate the bed-ridden cases from the local workhouses. The foundation stone reads as follows:
Halifax Union
St. Luke's Hospital
This foundation stone of St. Luke's Hospital, being an Infirmary for the sick poor in Halifax Poor Law Union, comprising the townships and parishes of Barkisland, Brighouse, Clifton, Elland and Fixby, Greetland, Halifax, Hartshead, Hipperholme, Luddenden Foot, Midgley, Norland, Northowram, Norwood Green and Coley, Queensbury, Rastrick, Rishworth, Shelf, Skircoat, Southowram, Sowerby, Sowerby Bridge, Soyland, Stainland with old Lindley, Upper Greetland and Warley, was laid on the 9th day of October 1897, by the Rev. C. E. Aspinall, M.A., J.Ponly, Chairman of the Halifax Board of Guardians


During the Great War the hospital became a military hospital (St Luke's Military Hospital) which treated soldiers sent back from the trenches in Flanders and other theatres of war. With the final abolition of the old Poor Laws in the 1920s the hospital was eventually transferred to the local Council and after the formation of the National Health Service in 1948 it became Halifax General Hospital. It was as Halifax General Hospital that I best remember it and even in the 1960s it did not look very different from the building pictured on the above postcard. Everything changed in 2004 when the large, new Calderdale Royal Hospital was built alongside the old building which now forms an administrative wing to the new hospital. However, if you stood in the right place and managed to avoid the endless stream of traffic, you could probably still recognise the distinctive shape of the old buildings.
I have two connections to the hospital. The first is that it is one of the two major hospital at which the GLW still works. The second is that my brother created the sculpture that stands in the grounds. The piece is called "The Dancing Girls" and portrays two of my nieces. It was to be the first of a series of three pieces which were commissioned for the opening of the new hospital in 2004. The other two never got cast for reasons which I will save for another post.
YOU MIGHT ALSO LIKE ......
SQUARE SUNSHINE : Described as "the thoughts and observations of a grandfather", the blog provides an ever-changing collection of images, thoughts and memories.
WEBSITE & FAMILY RESEMBLANCES : From the NfN Archives - more about my sculpting brother.
at December 08, 2009