Picture the scene if you will. It is the summer of 1588 and Britain faces the threat of naval defeat and invasion as an armada of Spanish ships sails up the English Channel and an army of 30,000 soldiers wait in the Netherlands to capitalise on the expected defeat of the British Navy. The British fleet is a rag-tag collection of old warships, privateers' galleons and rough trading vessels : not unlike the collection of little boats that would evacuate the troops from the Dunkirk beaches some 352 years later. At the heart of the British fleet are the 34 ships of the royal fleet, and the largest and most imposing of them all is the White Bear. Built in 1564, the 40 gun White Bear was seen as one of the grand old ships of the British Fleet at a time when the average life of a galleon was just 10 years. But under the command of Lord Edmund Sheffield, the White Bear played a central part in the routing of the Spanish Fleet and, in triumph, returned to port in Harwich on the 18th August. During the height of the great battle, one can almost imagine her captain gripping onto those sturdy timbers searching for the resolve to carry the battle through to a successful conclusion. 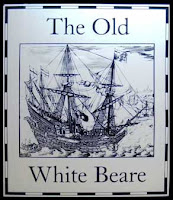 Picture the scene if you will. It is 1593 and we are in the port of Hull on the east coast of England. The country is now safe from invasion and Queen Elizabeth is secure on the throne of a country that is beginning to build a worldwide empire. The lessons of naval defense have been long learnt and the Royal Navy is renewing, re-equippping and re-building. The life of the White Bear comes to an end in the breakers' yards of Hull, where the timbers that once provided the very skeleton of the countries' salvation or now ripped from the heart of the ancient hulk. But wood was too precious to rot and to waste : there are always buyers for ships' timbers for the quality is good and the cuts are the best. One can imagine the salvage merchants appraising those timbers and thinking where they might be sold and how they might be used.
Picture the scene if you will. It is early June 2010 : a warm evening in West Yorkshire. An old blogger, his Good Lady Wife and his faithful dog decide that it is a perfect evening for a pint of foaming beer and they head to one of their favourite pubs, in the West Yorkshire village of Norwood Green. Our hero enters the bar - wife and dog having settled at one of the outside tables - to appraise the range of excellent traditional hand-pulled beers on offer. With a sense of anticipation, her runs his fingers along the ancient wooden bar top and makes his choice. 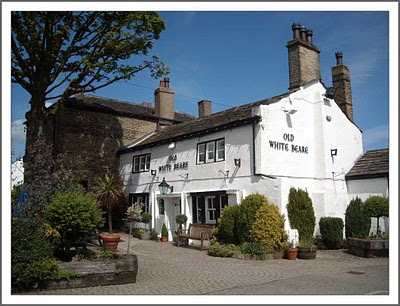 NOTE : The White Beare was originally built as a farmhouse and alehouse in 1533 on the Old Packhorse track running between Halifax and Leeds. It was rebuilt some 60 years later following a fire using timbers from the Elizabethan Galleon called ‘The White Bear’ and was renamed in honour of the ship.
This is a Theme Thursday Post. For other great Theme Thursday posts go to the Theme Thursday Blog.
at June 03, 2010