A Day Of Disaster And Humiliation

The 27th of June 2010 will go down in history as a day of disaster and humiliation. A day when dreams withered and died, when hopes metamorphosed into nothing more than self-delusion. A watershed from whose heights we can look down on the glory that is behind us and the ignominy which awaits us with the inevitability of death and taxes.
I refer, of course, to the Tasting Day in the Great Beer Challenge between myself and my ex-friend Mark. The two families and invited guests gathered at The Hall to judge the outcome of the home brewing contest between Mark and myself. After some initial success with my Bloggers' Bitter (see my last post on this subject) I have had growing concerns about it as it seemed to fade away and die between mashing in the brewing bucket and being transferred to the keg. But I ignored my concerns in the belief that faith and hope would make up for a deficit in skills (if this reminds you of a certain football team, so be it). But yesterday the potato chips were down and it was time to sort out the men from the boys. 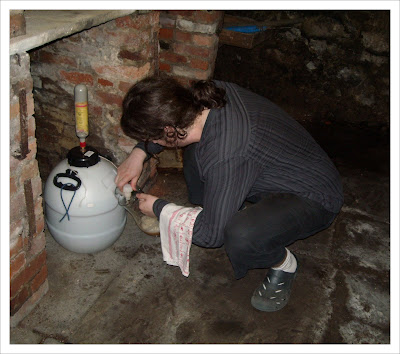 As soon as I saw Tim draw the first jug from Mark's keg (stored in a cool eighteenth century cellar) I knew the game was up. Whilst my brew looked jaded and tired, Mark's looked fresh and spirited. Where mine was dull and unimpressive, his was bright and adventurous (if this reminds you of a certain football match, so be it). To the taste his was everything you would look for : refreshing, pleasantly bitter, moreish and suitably alcoholic. With trepidation, I got The Lad to open a bottle of Bloggers' Bitter, decant it into a jug and serve it for tasting. 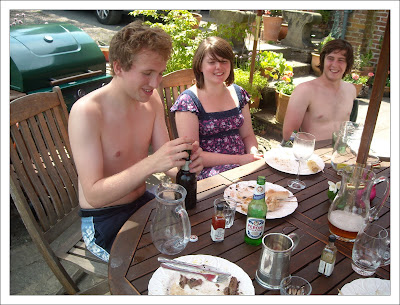 I think I was the first to spit it out, but I will long recall the look of relief on everyones' face when - following my lead - they were able to do the same. It was dead, it was atrophied, it was horrid, and - as far as I could tell - it was non-alcoholic. Little was said. Little needed to be said. Most people respectfully turned away as I poured the remaining brew over some unfortunate rose tree. 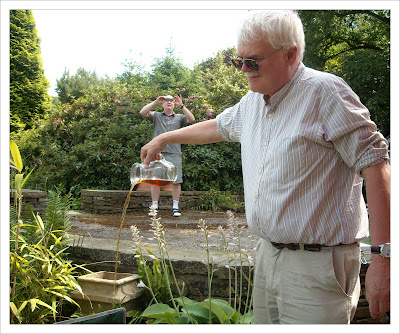 Or so I thought, until I came to process the official photograph of the event this morning. And there, clear as day, is my ex-friend Mark, with a large grin on his face, taking a photograph of my humiliating downfall. I need to mourn, to go away and lick my wounds, to re-examine my legitimate expectations and to try and build myself back up again after such a cruel day (if this reminds you of a certain nation of football supporters, so be it).
at June 28, 2010