William Brigham And A Handsome Woman 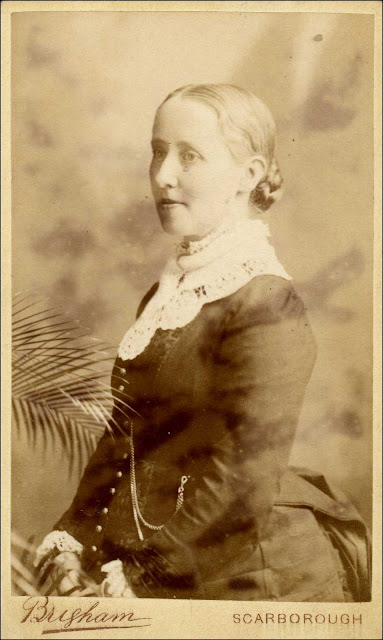 I am still acquiring a small collection of Carte de Visites and my latest acquisition is a picture of a rather handsome Victorian lady taken by William D Brigham at his studios in Scarborough. I have no idea of who the lady is, but half the fun of collecting old photographs is not knowing who they are, where they came from, or where they are going. As for a date, I would guess the photograph was taken during the golden age of CdV's - the 1880s. By 1890, Brigham had moved his studio from the Esplanade (on the sea front) to Westborough (in the centre of town). I have been able to find a few examples of Brigham's work on the Internet - mainly a photograph he took of a young Edith Sitwell in the early 1890s.
Looking at the face in the photograph above, I am half tempted to try a "then and now" approach to it. A modern day photograph using a similar pose, a little bit of Photoshop magic .... the results might be interesting. I will have to see if I can get anyone to sit in the right pose. I will report back.
at June 09, 2010