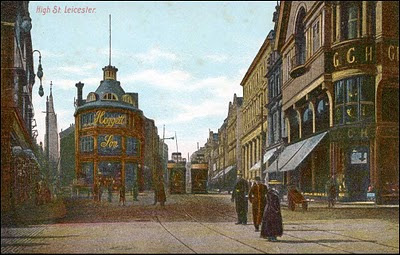 My postcard of the Week resulted from a random dip into my postcard box. It shows the junction of High Street and Silver Street in Leicester in, I would guess, about 1905. I don't know Leicester at all well - I only visited the city for the first time a couple of years ago - but a quick review of Google Earth reveals that much of the city centre has been rebuilt during the last fifty years or so, However, I did manage to find a photograph taken from almost exactly the same spot as the 1905 one, which suggests that the one part of the city centre that has retained its buildings and its architectural style is this particular part of the High Street. I tried to trace the history of Hogget Son and GGH but I could find no information on either. Hopefully someone familiar with Leicester will add a comment and let us know what happened to both shops.
at June 08, 2010