The Brigham Girl : Then And Now 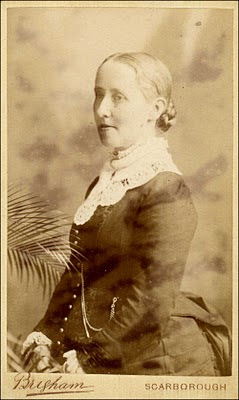 You may recall that a couple of weeks ago I published a small Carte de Visite I had acquired which showed a picture of a woman taken by the Victorian photographer William Brigham of Scarborough. At the time, I speculated on what the woman would look like if she had been photographed today : no older, but with modern clothing and a modern hairstyle. I promised to have a go - with the help of Photoshop and my friend Jane as a model - at producing a "Brigham Girl : Then And Now" study. Whilst we were in Oxford I took some photographs and since then I have been playing around with Photoshop and I have come up with a couple of images. 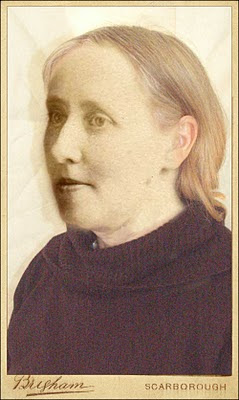 The first image attempts to show the Brigham girl with Jane's hair and jumper. Looking back, it would have been probably better to have had a photograph of Jane in a more contemporary setting - sat at her computer for example - but it is an interesting study. 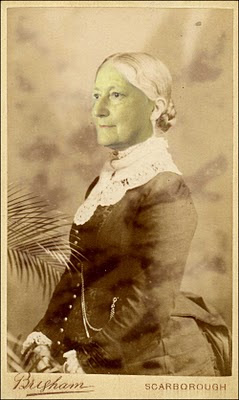 The second image switches the polarities, so to speak, and takes Jane's face back to the 1880s photograph. I think she looks quite grand, rather like a fine Victorian lady. As an experiment, it was interesting and one I must try again once a suitable old photograph comes up. The other project I promised to undertake whilst in Oxford - the Candy Floss Machine project - is another story which deserves a post all to itself so I will return to the subject next week. In the meantime, a bit thank you to Janie for agreeing to be my model and for the Good Lady Wife for acting as photographers' assistant.
at June 25, 2010