A Hero Of Old, Sat Astride A Brown Horse

Sometimes I surprise myself with the lengths I will go to in order to fulfill a Theme Thursday challenge. My willingness to make sacrifices, my overriding sense of duty, my resolute acceptance of my mission should be held up as examples to all. In better days my story would have been serialised on the inner pages of The Eagle comic under the generic heading "Men Who Helped Build The Empire". In years to come people would talk with pride of the exploits of Lord Nelson, the Duke of Wellington, Scott of the Antarctic, and Alan Burnett. What did I do, you may ask. I went to the pub, I will reply.
Not any pub. Oh, that would have been easy. That would have been a challenge for a mere mortal. No, to meet the challenge set, the pub would need a "brown" somewhere in the title. I could have set out for the Brown Cow in the centre of Halifax .... but that closed in 1863. The Brown Cow in Elland rose up to public house heaven in 1934, followed with indecent haste by a whole succession of Brown Cows in King Cross, Ripponden and Sowerby Bridge. It was almost as though some dreadful disease - some alcoholic BSE - was laying waste to all the cows. I went in search of a Brown Bear but one couldn't be found within the County and any hopes that someone had named a pub the Brown Ferret or the Brown Chihuahua were dashed with a cruelty that was almost palpable. But then, after hours of weary searching, just as I was about to give up, just as I was about to settle for a cup of brown tea, then I found the Brown Horse. 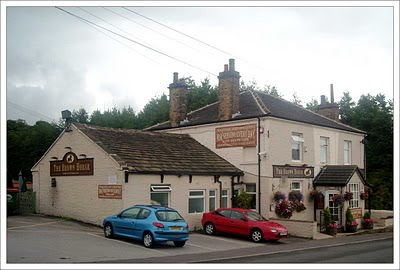 According to the sign, it is Yorkshire's only Brown Horse. The fact that there may be other Brown Horses in other counties meant nothing to me. Try telling a dying man who falls upon a desert oasis that it is no big deal because there is another oasis a few hundred miles away. For me, the Brown Horse was a sign of salvation on the road to Keighley. For me, for just a few precious moments, it was home. As I went inside and ordered a brown ale (Newcastle Brown - creamy and nutty taste, fresh and malty) I recalled those famous words written by my good friend Martin Hodges :
One of the courageous few,
Alan traveled each lonely mile.
In desperate search of the perfect brew
Wood cask, brass tap and porous spile.

For other courageous attempts to match up to this week's theme, go to the THEME THURSDAY BLOG.
at August 05, 2010