Theme Thursday : I Brush My Teeth With A Tooth Brush 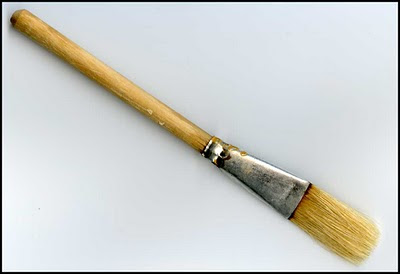 I know I am late for Theme Thursday but it is a tale worth telling. And it is a true tale. Some 25 years ago what had, until then, been a gradual hearing loss suddenly accelerated and within a comparatively short period of time I became more or less totally deaf. Whilst I could still just about hear myself - and believe me, this is by far the most useful function of hearing - I was unable to hear anyone else. It was a traumatic time, not just for me but for all those who were close to me. It was quickly decided - by my unofficial support committee made up of concerned relatives, friends and medical advisers - that I should learn to lip-read as a matter of priority and as soon as I had mastered this simple skill move on to sign language. The one problem with this splendid course of therapy was that I was completely incapable of learning even the rudimentary principles of lip-reading, never mind the more complex rules of sign language. My objections were swiftly swept aside and I was enrolled into a lip-reading class at the local college.
The instructor was a rather sweet middle aged lady who had taken up good works to fill the somewhat dark winter afternoons that characterised Sheffield in the 1980s. Her class was made up of rather sweet middle aged ladies who had taken up the mantle of education in order to carry out good works at some stage in the future. And then there was me. I was the only man in the group, the only person under the age of forty, the only person who could not master the basic principles of lip-reading, and, interestingly enough, the only person who was deaf (why the others had gone to lip-reading classes I never managed to discover). I would sit at the back of the class, with a permanent look of embarrassed perplexity, and daydream about pints of beer and similar stuff. Meanwhile the rest of the class would do exercises.
The exercises comprised of the teacher choosing a common theme or subject which she would announce to the class (you can see how the ability to hear was a distinct advantage in the learning process). She would then silently mouth a series of phrases and, where appropriate make little actions to provide an extra clue to their meaning. She would point to a member of the class and they would have to say out loud what the particular phrase was (again you get an idea of the value of being able to hear). I would try to keep up with what was happening and desperately hope that the dreaded finger would not point in my direction.
On the day in question the chosen theme was announced (to this day I am not sure what it was) and the first phrase was mouthed with all the flourish of a Shakespearean actress. The accompanying actions (a finger pushed along the front of the teeth) meant that even I worked out the phrase. The finger pointed towards a little lady on the front row who always seemed to be knitting during the lessons and had the remarkable ability to knit one, pearl one and lip-read one at the same time. "I brush my teeth with a tooth brush" she must have said because the teacher smiled and gave a cute little clap of her hands. She then started to run her fingers through her hair and mouthed out what was obviously "I brush my hair with a hair brush". This time the finger was directed at a shy lady who rarely spoke except to provide the word perfect answer at the prompt of the pointing finger. The third phrase was more problematic and was accompanied by a rather delicate brushing motion and a look of deep satisfaction on her face.
The dreaded finger swept around to me and I desperately tried to match up the actions with the few mouth shapes I had managed to recognise. As the entire class stared in my direction I tried to find a solution to the puzzle before me. And then I had it. It was so simple once I had made the breakthrough. It was obvious. In a loud and slightly triumphal voice I shouted out "I brush my thighs with a pastry brush".
I never attended the class again. It was the straw that broke the camels back. To this day, whenever I see anyone with a pastry brush, brushing milk or egg-white onto their freshly made pies I think of that poor lady and the shock on her face when I made that particular accusation about her private life.
For other excellent Theme Thursday posts please visit the Theme Thursday Blog.
at August 19, 2010