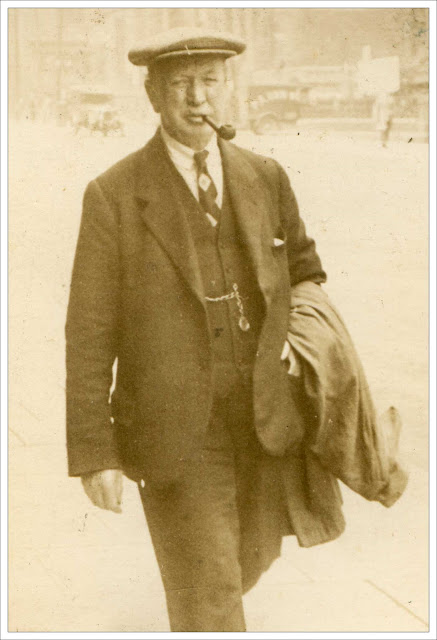 You may remember that a few weeks ago I was trying to identify my mothers' Uncle Fowler Beanland from his postcard and photograph collection. The rather hit and miss method I was using was to identify which face appeared most frequently in the photographs and assume that this might be the elusive Fowler B. I had hoped that I might be able to get the new version of Picasa to do the job for me - it has rather neat facial recognition software built in - but I never quite worked out how to do this. But, the problem is solved. Today I can launch a picture of Fowler to the world. Exclusive. Fowler is found.
Whilst sorting through some junk yesterday I found the old album his postcard collection had originally been kept in. About twenty years ago I took the postcards out of the crumbling dog-eared album in order to protect them and I just assumed that I had taken them all out. But on carefully examination it appears that I had left a few in place as they had been glued to the inside cover of the album. One is a handwritten note which sets out the origin of both the collection and the album. 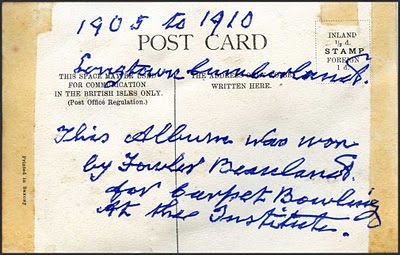 The other is the picture of the proud, solid, gritty, flat-capped Yorkshire man which appears at the head of this post. Surely this must be Fowler himself. Surely Fowler has been found.
Having found Fowler you can join me in finding all the other Sepia Saturday 35 posts by following the links on the SEPIA SATURDAY BLOG.
at August 06, 2010