Sepia Saturday 38 : What Else But A Pub

My apologies for being absent for so long : the hiatus went on until it almost became a recess. The Lad has been home, the Good Lady Wife has been on holiday and we have had visitors and therefore things have been busy around here. Next week should see a return to normality so I hope to start posting again soon and catching up with what has been happening to all my fiends. In the meantime here is my early Sepia Saturday contribution. And the subject of my contribution this week? Well, what else but a pub.
I bought this postcard showing the George Hotel in Brighouse fairly recently. I suspect the picture must have been taken about 1905, in the days when taking photographs was still unusual enough to attract a small band of onlookers. Those little children in the forefront will now be long gone, but most of the buildings still remain. 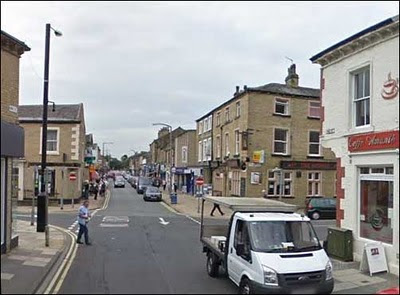 The George Hotel was built in 1815 and it originally had a small brew-house to the rear of the building. At the time of my earlier photograph James Dyson is shown as being the owner of the hotel (you can just make out the name under the George Hotel sign). Records show that James Dyson was licensee at the hotel from 1889 to 1915, at which time he moved to the New Inn in Marsden. The Hotel recently had "For Sale" signs up, but I am glad to see that it is now open for business again. In five years time it will be its' bicentenary and I intend to raise a glass in celebration there - if it and if I are still around.
Celebrate the other Sepia Saturday posts by following the links from the Sepia Saturday Blog.
at August 26, 2010