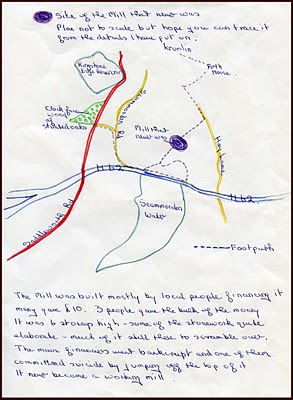 You will no doubt recall that in the book "Treasure Island" by Robert Louis Stevenson, the young Jim Hawkins comes into possession of a treasure map whilst serving tables in the Admiral Benbow Inn. Well, a similar thing happened to me the other day. I was sat in the Rock Tavern enjoying the odd pint of Timothy Taylor Best Bitter when I was handed the above treasure map by my friend and fellow-drinker, Richard. With it came a couple of old newspaper cuttings which told the story of the mill that never was. The treasure, of course, was a historical treasure, the very best kind. Gold gets stolen, silver tarnishes : but historical treasure can continues to shine down the ages.
The story is an interesting one and is summarised in Richard's notes that accompany the map. At the beginning of the 1860s a group of local residents in the Scammonden and Blackburn valley area to the south-west of Halifax established the Scammonden Commercial Cotton Spinning Company to take advantage of the boom in cotton-spinning  that was then taking place. A group of local investors put up money ranging from as little as £10 to £150 or more to finance the project and a lofty six story mill was eventually built. It had abundant water power from the adjacent river and was large enough to house 38,000 spindles according to the company directors. 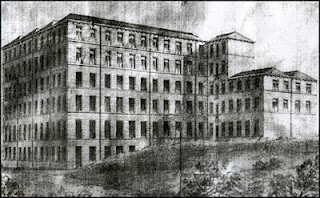 But like so many enterprises that were planned to take advantage of an existing commercial boom or fashion - one is reminded of James Ward and William Craven of the ill-fated Osset Spa - the timing was all wrong. By the time the foundations were built the lack of cotton imports due to the American Civil War had sent the cotton industry into sharp decline. Nevertheless the Scammonden investors kept on hoping, kept on investing, and kept on building, in the belief that the recession would come to an end before they ran out of money. It didn't. By August 1865 the mill was largely finished, but it was never occupied and the Scammonden Commercial Cotton Spinning Company went into liquidation. Attempts to sell the mill were hampered by the fact that one of the final pieces of the proposed project - a road to link the mill to the rest of the area - was never completed, and the mill building eventually fell into ruin.
According to Richard's notes, if you poke about in the undergrowth you can still find some of the old stonework. His map will help me to locate the site. But I think I will wait until next week before I go exploring. My niece and her husband are coming to stay for a few weeks so I think I will take them along with me as I go in search of my buried treasure. It would seem strangely appropriate. They live out in the British Virgin Islands. If you look out from their balcony you can see a string of small islands amongst which will be Norman Island. And Norman Island, it is believed, was the real geographic inspiration for Stevenson's Treasure Island. As I said, strangely appropriate.
at August 31, 2010