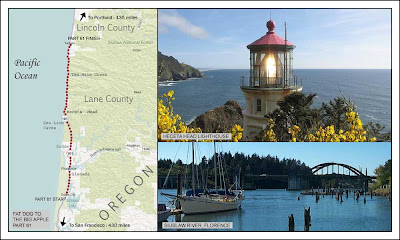 "No, not pig's ear, new year". I sometimes wondered whether Amy, my soft-coated wheaten terrier, misunderstood me on purpose, just to wind me up. We were walking north along Highway 101 sandwiched between the great Oregon sand dunes to our left and Woahink Lake to our right. I was trying to explain to my occasionally-faithful travelling companion that we needed to make a New Year Resolution to send regular reports of our epic virtual dog-walk to the News From Nowhere Blog. But the wind blew in from the Pacific and "New Year" was somehow transformed into a promise to buy Amy a pig's ear when we next came across a pet shop. For the 100th time since we left Los Angeles, I asked myself why had I chosen Amy as my walking companion. It's a virtual trip after all, and I could have chosen any manner of virtual companion. Shakespeare might have been a bit too wordy - "Looketh at those mounds of mighty silicon, prithee" - and I have always found George Bernard Shaw a touch depressing, but Albert Einstein might have been fun, or Jacob Bronowski, or sexy Lillian Gish. Instead I am stuck for the next ten years with a dumb blond of a dog whose interest range from chicken to pig's ears.
As we approached the town of Florence our spirits rose. "Beautiful evergreen forests, 17 sparkling lakes, 40 miles of towering dunes, meandering Siuslaw River and the dazzling Pacific Ocean" : I read to Amy from the tourist brochure, but I suspect it was the presence of the Florence Area Humane Society ("supplier of pig's ears and other dog treats") which caused her tail to wag. But pigs and their ears aside, Florence is a charming spot, particularly the old town which clings to the banks of the Siuslaw River. There is rather a nice story about how it got its name and that was from the wreck of an old French sailing vessel - "The Florence" - which ran aground near the mouth of the Siuslaw River. The plank with the name of the boat was washed ashore and later hung over the old hotel. Thus the town became "Florence"
As Amy chewed her pig's ear and I enjoyed a glass of extraordinary strong Black Elk Stout from the Florence-based Wakonda Brewery, I reflected on the possibility of relocating myself (and The Good Lady Wife, of course) to this part of the Oregon coast. Florence is quite a retirement community with well over a third of the population being of more mature years (wrinklies). According to the entertainment guide, appearing in the Florence area in the coming weeks will be Herman's Hermits, The Crystals, Elton John, and - somewhat surprisingly - Elvis Presley. But perhaps there is more to life than sand dunes, Elvis impersonators and pig's ears, so I put off my relocation plans for the moment.
If we did decide to make the move to Florence and couldn't afford the house prices (average advertised house price was $279,662 last year) we could do worse than move into the Sea Lion Caves a few miles up the coast. Seniors can get admittance for just $11 and children under 2 get in free (and Amy has the intelligence and cuteness of a two-year old). According to the Guinness Book of Records, Sea Lion Caves are the largest sea caves in the world. More importantly, they are the last remaining home in North America of stellar sea lions and Amy is almost as fond of a choice cut of sea lion as she is of pig's ears (Amy has asked me to point out to any conservationists reading this, that this is just one of her little jokes). Not wanting to put the issue to the test, we bi-passed the caves and took the tour of the charming little Heceta Head Lighthouse instead.
And then we walked north and enjoyed the lovely coastal views and reflected on the fact that we were happy to be virtually walking again. I sang bits from the greatest hits of Herman's Hermits whilst Amy picked out bits of pig ear which had become lodged between her teeth. Man and dog at one with nature.