A Moving Tale From Hull 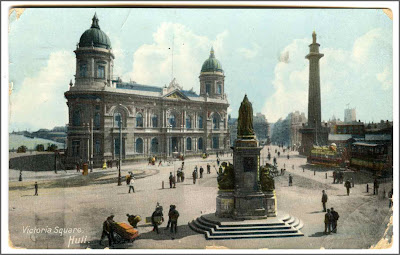 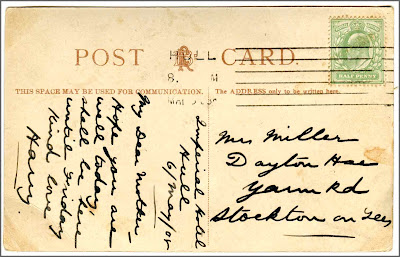 My collection of old postcards has been built on the principles of serendipity : there is no great collecting theme nor is there a geographic concentration. I am as happy with a picture postcard of New York as with one of old York. Edwardian chorus girls and late Victorian statesman nestle side by side in my collection (as they probably did in real life). If there is a common factor it tends to be that the cards are scruffy, dog-eared and cheap. Postcards are fantastic time capsules : the results of a great social experiment which caused ordinary people to choose a contemporary view and write a few words of greeting on the reverse side. I would happily take over the Great Turbine Hall at the Tate Modern and pin up thousands of vintage postcards on the walls, some picture side up, some message side up. For me they would say so much, tell so many stories, send thoughts in so many diverse directions. As the directors of the Tate Modern have not yet invited me to put on such an exhibition, I am reduced to regularly featuring random cards here on News From Nowhere.
My random card on this occasion shows Victoria Square in the East Yorkshire city of Hull. The magnificent building in the centre of the view was (when the photograph was taken in the first decade of the twentieth century) the headquarters of the Hull Dock Company. Now it is the home of the Hull Maritime Museum which, I regret to say, I have never visited. Once the sun comes out, I am determined to visit Hull and make up for this cultural shortfall.
The splendid monument that can be seen on the right of the postcard is the 102 foot high Wilberforce Monument which was built in memory of Hull's most famous son, the anti-slavery campaigner, William Wilberforce. Sadly, in the 1930s, some short-sighted local Councillors decided that the monument got in the way of the tram-lines and it was moved - millstone grit block by millstone grit block - to some ornamental gardens nearby.
Harry Miller, the sender of the card, was staying at the Imperial Hotel in Hull in 1908, but I can find no record of such a hotel today. Rather strangely, however, a company - the Imperial Hotel Hull Co - does exists with registered offices in London. It is listed as a property development company. So the card provides a somewhat moving little story : the Dock Offices have become a museum, the Wilberforce Monument has been moved to a park, and the Imperial Hotel has moved to a firm of Chartered Accountants in London.
at January 27, 2011