Sepia Saturday 56 : The Acme Of Perfection In Pierrotic Entertainment 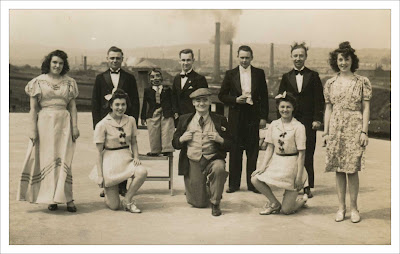 I inherited this photograph from my Auntie Annie and Uncle Harry. During the late twenties and early thirties, Uncle Harry "trod the boards" as a member of a touring concert party, and this, I believe, is a picture of the group in question - "The Silhouettes Concert Party". Without doubt, that is Uncle Harry ("Harry Moore Pianist and Tenor Vocalist"), second from the right. The identity of the other members of the party is somewhat unclear, but I also inherited a small programme from an appearance by the group at the Pier Hall, Bognar in 1931 and this provides a cast list. 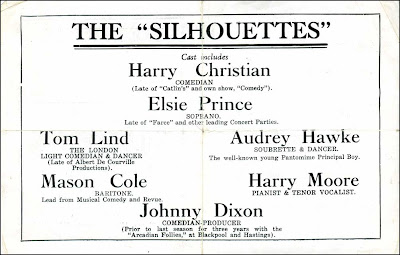 Now we have names, the game becomes matching names to faces. My guess is as follows, but there is no reason why my guess is better than anyone else's, so feel free to mix and match at will. But, for me, the photograph could well feature (from left to right) :
Elsie Prince (Soprano, late of "Farce" and other leading concert parties)
Tom Lind (The London Light Comedian and Dancer, late of Albert De Courville Productions)
Unknown Dancer
Unknown Puppet!
Harry Christian (Comedian, late of "Catlins" and own show "Comedy")
Johnny Dixon (Comedian/Producer, prior to the last season for three years with the "Arcadian Follies" at Blackpool and Hastings)
Mason Cole (Baritone, lead from musical comedy and revue)
Unknown Dancer
Harry Moore
Audrey Hawke (Soubrette and Dancer, a well known young pantomime principal boy)
The reverse of the cast list provides a wonderful description - "We Beg To State ... " - of the type of entertainment on offer by this "exceptional attraction", which was "The Acme of Perfection In Pierrotic Entertainment". So roll up, roll up and reserve your seats now. 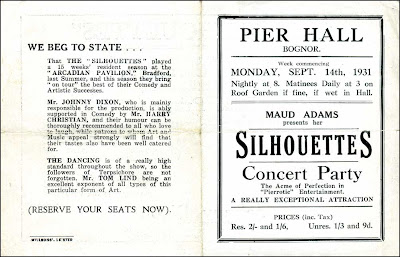 I have another document dating back to Uncle Harry's career in the Concert Party which I will return to next week. In the meantime why not take a look at some of the other fabulous Sepia Saturday entries by going to the Sepia Saturday Blog.