Smoke And Writs : A Story Of Victorian Enmity 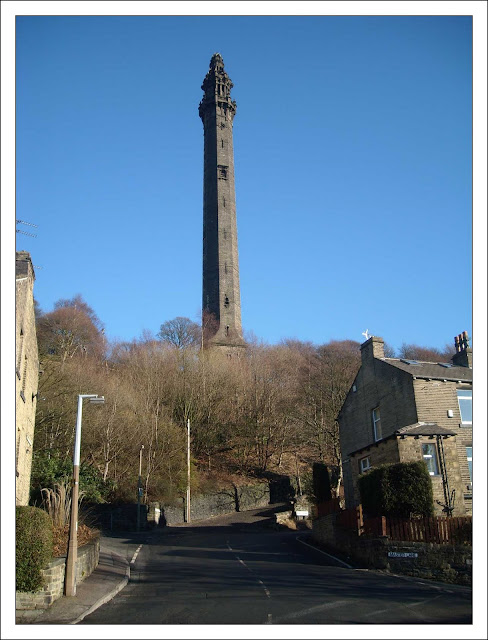 The other day on my Picture Post Blog I featured a photograph that included Wainhouse Tower in Halifax and promised I would relate the story of this strange structure on News From Nowhere. Anyone who is familiar with Halifax in West Yorkshire will have seen Wainhouse Tower - it dominates the valley of the River Calder - but the story behind what is said to be the tallest folly in the world is as strange as the mock-gothic octagonal tower itself. The tower is an abiding monument to, not only Victorian eccentricity, but also the deep enmity between neighbours.
The two neighbours were John Edward Wainhouse (1817-1883) who has been described as something of an  aesthete, a lover of the arts and sciences, and a determined pamphleteer (effectively a nineteenth century blogger), and Sir Henry Edwards (1812-1886), Baronet, Tory MP, Magistrate, High Sheriff of Yorkshire and leading Freemason. Both men had been blessed with a fair amount of wealth and an even more generous supply of eccentricity. Edwards' pet hates included smoking chimneys, linen hanging out to dry, John Edward Wainhouse, and, for some bizarre reason, white cattle. Wainhouses' pet hates were limited to one : Sir Henry Edwards. 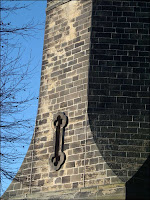 In 1870, the Smoke Abatement Act was introduced and Edwards, who was a leading light in the West Yorkshire Smoke Prevention Association, is said to have complained about the smoke emerging from the Washer Lane Dye Works which, at the time, was owned by J E Wainhouse. Wainhouse drew up plans to pipe the smoke to a massive chimney that he would construct near the top of the valley on land that ajoined the home of Sir Henry Edwards. Whilst it was still being constructed, Wainhouse sold the dyeworks and the new owner refused to continue with this expensive, and rather silly, project, but Wainhouse - never being one to let sleeping enmities lie - decided to complete the project himself in order to annoy Edwards. The design was changed, steps were built inside the structure and mock-gothic arrow slits were added. The massive 280 foot tower was crowned with ornate, neo-renaissance style viewing platform. Wainhouse claimed that the reason for this was so that he could carry out astronomical observations and scientific experiments, but the real driving force was to annoy Edwards. The feud between the two Victorian gentlemen continued for years and they continued to fight each other in the courts, and in printed pamphlets. 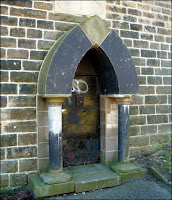 After the death of Wainhouse, the tower was sold by auction but nobody could think of a viable use for it. For a time the Gothic entrance was used as a chicken coop. One of the strangest uses was as a radio aerial for an early experimental radio station (known as 2KD) which was operated in the first decade of the twentieth century by William Ernest Denison, the Chairman of the local newspaper company, the Halifax Courier. By 1919 there was a danger that it would either be demolished or that it would fall down and the same newspaper led a campaign for it to be bought by public subscription and placed in the care of the local Council. It was bought by the Council in 1919 for £450.  During the rest of the century it was opened a couple of times a year so that local people could make the long climb up 400 steps to enjoy the views from the viewing platform. It was closed in 2007 in order to carry out essential repairs but the Tower is open again. The opening days for 2011 have yet to be published, but when they are I will try to climb my way to the top and let you know whether I can still see Sir Henry Edwards, shaking his fist and waving a writ, from up there.
at January 21, 2011