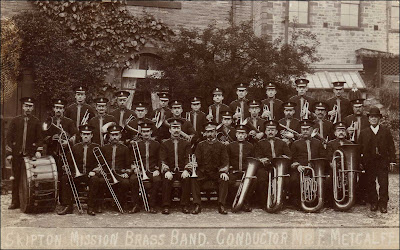 My Sepia Saturday contribution this week is a bit of a lucky dip into Great Uncle Fowlers' Picture Postcard Collection. And out comes a "real photograph" of the Skipton Mission Brass Band (Conductor Mr F Metcalfe). Quite why he should have this picture I am not sure : I don't think he was a bandsman and he lived in Keighley rather than Skipton (although there is only a few miles between the two). But it is a fine photograph in a rich sepia tone. We could probably track down the identity of the photographers' assistant who produced the print as he (or she) has conveniently left their fingerprint in the left edge of the print.
Skipton Mission Brass Band was formed in the 1870s and continued to exist until the outbreak of World War I (1914). After the war it was reformed but the name was changed to Skipton Prize Band. It appears that Fred Metcalfe continued as the conductor and the band won considerable fame (and a number of prizes) at competitions in the 1920s and 1930s. The band still exists and is now known as Skipton Brass.
There is a splendid website called IBEW (Internet Bandsman's Everything Within) which has a marvelous collection of old band photographs and within the collection are two of the Skipton Mission Band. Whilst these are not the same photograph as the one in my collection, several of the faces are recognisable.
Take the time to view some of the other Sepia Saturday contributions this weekend. And whilst you do so why not listen to the Black Dyke Mills Band play Annie Laurie.