Sepia Saturday 58 : J F W Galbraith And The Secrets Of The Mauretania 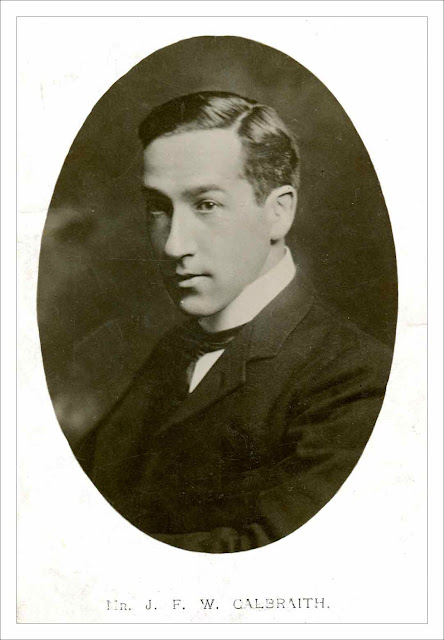 My Sepia Saturday spotlight this week falls on Mr J. F. W. Galbraith. Who, you may ask, was J. F. W. Galbraith? The answer is, I am not really sure. And neither is anyone else.
His photograph is on a real photograph postcard that was added to my collection many years ago. There is no further information on the reverse of the card, nor is there any message, stamp or postmark (and therefore, no date). But surely in these days of instant and unlimited information it should be easy to find out everything about him? It seems not. All I could find out was that he  was a judge and a Conservative member of parliament for the East Surrey constituency between 1922 and 1935. Even though the full record of Parliamentary debates for the last two hundred years (known as Hansard) is available on-line, it appears that Mr Galbraith never uttered a word during his thirteen years in Parliament. Another vague reference suggests that he was President of the Oxford Union in Trinity Term of 1892. And the final piece of a very incomplete jigsaw puzzle is that he was listed as a passenger on the Mauretania sailing from New York to Liverpool on the 13 September 1911. I have to say that my heart did a little dance when I eventually found a Wikipedia page devoted to James Francis Wallace Galbraith but sank into despair again when I discovered that the page was blank.
Perhaps we should not begrudge JFWG his privacy. He took his secrets, his loves, his successes and his failures to his grave and then told nobody where his grave was. All he left us with is an image, a knowing look, and a half-formed smile. A teasing hint perhaps of what might lie below the surface, of what happened on board the Mauretania in September 1911.
Reading the Collected Political Speeches of J F  Galbraith will leave you with time to spare, so why not pop over to the Sepia Saturday Blog and look at the other Sepia Saturday 58 posts.