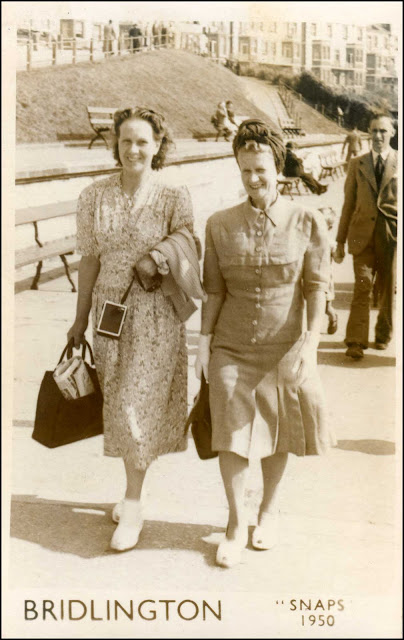 One of the interesting consequences of exploring the "Family Stash" of old photographs on a week-by-week basis is that you slowly build up a picture of time and events, rather like you do when you are putting a jig-saw puzzle together. You may recall that I assumed that my last Sepia Saturday photograph had been taken in 1950. However, this week here is a picture which shows my mother (along with Auntie Annie) in Bridlington in that same year. Now, two things are as certain as the waning of the moon : back in those days there was only ever one family holiday each year, and as far as our family was concerned they alternated between Bridlington and New Brighton. So I need to amend the suggested date on the last Sepia Saturday photograph to 1951.


One of the fascinating things about this picture is that it clearly shows the Box Brownie camera that must have been used to take most of the other photographs in the stash. This particular photograph was taken, however, by one of the team of photographers who would wander around Bridlington in the summer months taking "snaps". The developed photographs would be displayed in the window of the photographers' shop just next to the harbour and if you liked the image, you could go in and buy a copy. There is an excellent description of the Bridlington Snaps Company on the fascinating Walking Pictures Blog.

Now I have scanned it and enlarged it, I have come to think of it as one of my very favourite photographs of my mother. It is a picture worthy of Cartier-Bresson at his best.

TAKE A LOOK AT THE OTHER BLOGGERS TAKING PART IN SEPIA SATURDAY 89
at August 26, 2011