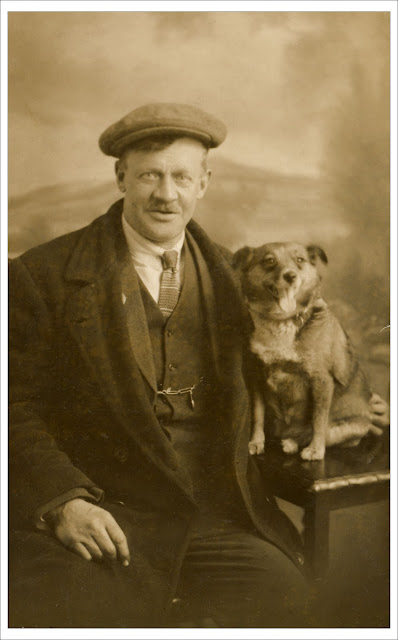 Dogs are the theme over on Sepia Saturday this week and the theme took me straight to this photograph of my grandfather, Enoch Burnett, and his dog. Somewhere in the recesses of my mind something is telling me that the dog was called Betty, but I can't be entirely sure of that. 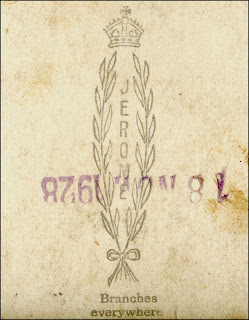 I can be more certain about the date the photograph was taken because a date stamp has been applied to the reverse of the print : 18 November 1928. This was standard procedure at Jerome Studios which had "branches everywhere" in the UK. Enoch would have been 50 at the time the picture was taken and one can only wonder what caused him to take his dog along to the Jerome's branch in Bradford and have the portrait taken. He was not a great lover of studio portraits and I can find few of him other than this one and the one taken during the Great War which features all of the family. The strange thing is that he looks younger in this photograph than the one which was taken ten or eleven years earlier. Perhaps the dog had won prizes - she has the look of a great litter ratter - or perhaps there was a bond of affection there which drove the pair of them to have their likeness's captured in sepia forever. It is quite a nice idea - perhaps I will try and recreate the photograph using my own canine pal, Amy. All I need to know is how the photographers at Jerome's managed to keep her so still and looking into the camera. I will carry out experiments over the coming days and report back.

For more old photographs of long gone people and long gone dogs go the the Sepia Saturday Blog and follow the links.
at February 04, 2012