TREAT TO HALIFAX WORKHOUSE INMATES
The mayor and Mayoress of Halifax are giving their annual treat to the inmates of the Workhouse on Wednesday, July 22. The gathering will be held at the Workhouse, and the Mayor has engaged King Cross band to play during the afternoon. Tea will be provided in the dining hall, and afterwards an entertainment will be given. Ald. Ingham will present the men with tobacco and the women and children with toffee. All Guardians are invited, and a number of private friends of the Mayor and the Mayoress.

HALIFAX UNION WORKHOUSE, WHICH WAS IN GIBBET STREET, WAS OPENED IN 1840 AND REMAINED ACTIVE UNTIL THE 1930s WHEN IT BECAME A HOSPITAL

IMPROVING RELATIONS WITH GERMANY
The "Kolnische Volks-Zeitung" (organ of the German Centre) in an interesting article on "Our relations with England" refers to the great improvement in British-German relations, and the possible causes and occurrences that may have led to it. It says : "One thing is certain, that the Ambassadors' Conference in London during the Balkan crisis has played a prominent part in the history of British-German understanding." With reference to this conference, a high tribute is paid to Sir Edward Grey, and to his great authority and tact. The visit of the English squadron to Kiel, besides testifying to these improved relations, the organ of the Centre continues, may also have a bearing on the continuation of good relations between the two peoples, insomuch as it will have convinced the British naval officers that the German Navy does not harbour any hostile intentions against England.

JUST 24 DAYS AFTER THE PUBLICATION OF THIS ARTICLE, ENGLAND AND GERMANY WERE AT WAR 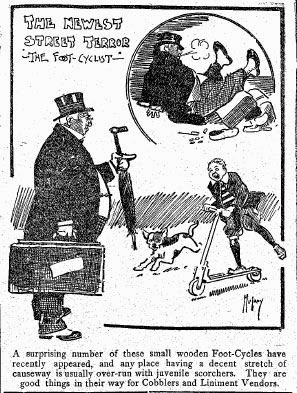 CYCLING ACCIDENT
A serious accident befell Frank Higgins, a wire drawer, of 11 Back Albion Street, Brighouse, about 7.15 on Wednesday. He was cycling down Halifax Road and when nearing the bottom - the roadway is steep - he ran into a black retriever dog and was thrown from his machine. When picked up by Ernest Solomon he was found to be unconscious. The injured man was conveyed home and Dr. Farrar sent for. He recovered consciousness, but was suffering from slight concussion.

DR FARRAR HAD ROOMS ON LOWER BRIGGATE, BRIGHOUSE. MANY YEARS AFTER HIS RETIREMENT, HUMAN BONES WERE FOUND IN THE ATTIC OF HIS FORMER HOUSE.

SILK DRESSERS' STRIKE
Last night, a largely attended meeting of silk workers was held at the Labour Club, Brighouse, when it was reported that a strike had taken place at the Calder Bank and Belle Vue Mills of John Cheetham and Sons. Rather more than 100 silk dressers had ceased work against an alleged excessive amount of work which they were required to do in consequence of the recent advance of wages. The men contended that the amount of work which was expected of them was injurious to health and could not be done. The attitude taken up was supported by the meeting, and it was feared that unless some concessions are made by the various firms in the town a general strike will ensue in the near future. The present terms were only agreed to by the men after the last strike, a few months ago, under strong protest, and only after their leaders had strongly advised them to give them a trial.