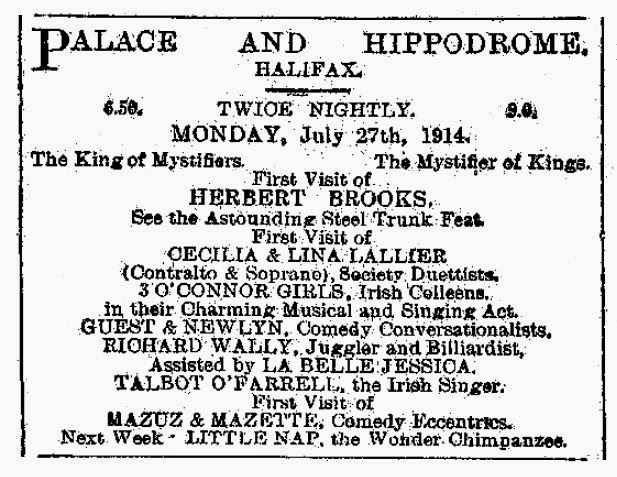 The Palace / Hippodrome Theatre was located on the corner of Southgate and Wards End, just opposite the Theatre Royal (which is just about still standing today). Built in 1903, it is supposed to have been known as "the sweetest theatre in the North" because, during its construction, sugar was mixed in with the mortor to stop it freezing. Many famous acts appeared there - including Charlie Chaplin, Sir Harry Lauder, and Little Tich - before it was finally demolished in 1960. Herbert Brooks was a magician and escapologist famous for his ability to escape from a locked steel trunk. Little Nap, the wonder chimpanzee, was famous for riding a motorcycle whilst dressed as Napoleon!


THIS WEEK AT THE HALIFAX BOROUGH COURT
MONDAY
Before Mr A.W. Whitley (presiding) and Mr J Walker Clerk
HE "DID NOT WORK"


The reason given to Taskmaster E Town at the Halifax Workhouse by Arthur McGowan (29), a strapping specimen of humanity, for refusing to do his allotted task, was that he "did not work".  As a result of his refusal McGowan appeared to answer a charge of refusing to break stones that morning. E Town said he visited McGowan eight times in two and a half hours, but never found him working. All he could get out of him was that he did not work. Prisoner replying to Mr Robertshaw (clerk) said "I told him I could not break stones" Mr Robertshaw : Why?  Because I am not able-bodied enough. He was committed for 21 days with hard labour.


Breaking up large stones into small pieces was one of the most common forms of work given to men in the Workhouse. It was physically hard work, the amount performed could be easily measured and the end product could be sold for road making. At the outbreak of the Great War, two out of every five recruits to the British Army were found to be unfit to serve due to disease, ill-health, and malnutrition.

In August 1914, less than a month after the publication of this notice, the Battle of the Ardennes - one of the first of the battles of the Great War - was underway. Within two days there were over 60,000 casualties.


Halifax Temperance Society held its open air meeting at the bottom of Lister Lane on Monday evening. Mr Jacob Farrar presided and gave reminiscences of his teetotal career, which had extended about 60 years - a life full of vigour and enjoyment of the truest kind. He said though he was close on 70 years of age, he could work well, eat well and sleep well, and he never felt better; and this he attributed to his temperance principles. Mr William Redman, another temperance veteran, in his 89th year, also supported the meeting.


Mr W H Duckett, Band of Hope Agent, spoke on the after effects of alcohol, how it robbed us of what is brightest and best and left us with what we could easily spare. In the first instance, he said, it cost England 100,000 lives every year through strong drink - a rather large number, but nevertheless true, and understated rather than over. 90% of crime was caused by the drink, so said Lord Alverstone, Chief Justice. 90% of the cases of cruelty to children was the result of the drink, said Robert Parr, director NSPCC. 90% of lunacy was caused by drink, and but for the drink the Divorce Court might practically close up according to Lord Gorell.


By the 1830s there were said to be over 1,000 inns, taverns and alehouses in Halifax, many of whom brewed their own beer. The temperance movement grew in strength during the nineteenth century, and by 1914 there were eight temperance hotels in Halifax and another four in Brighouse. 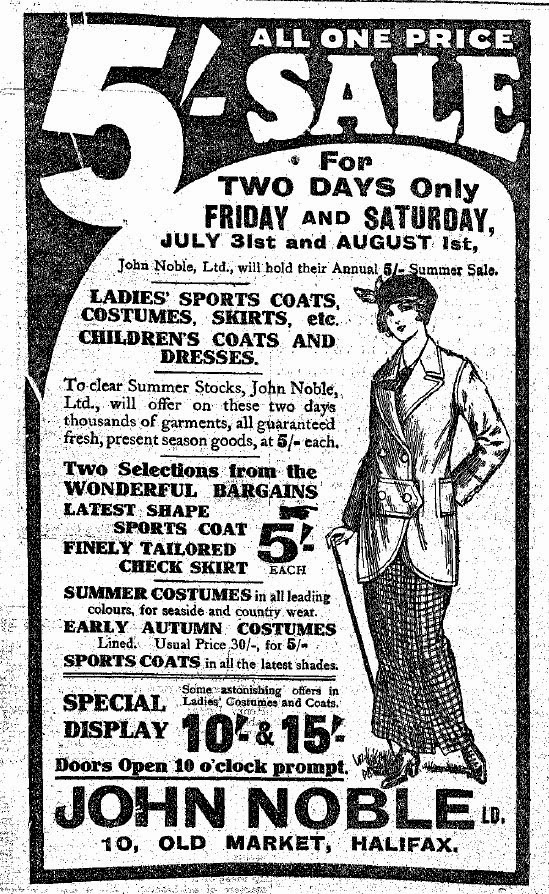