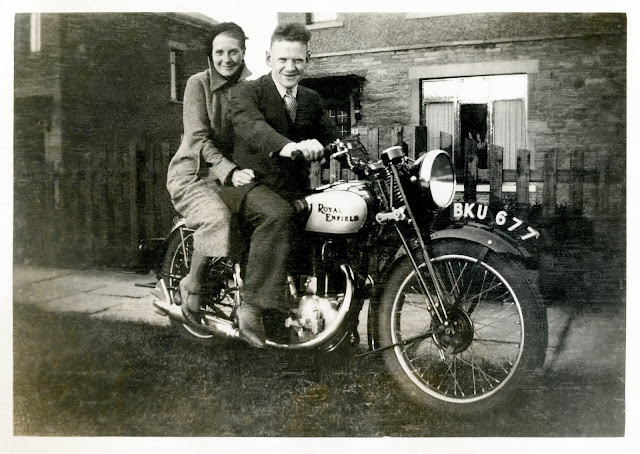 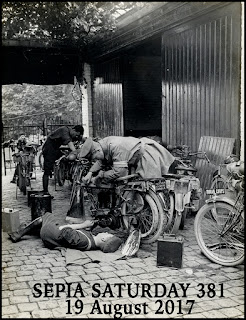 Think of it as being a bit like a gold rush. When gold is first discovered it is a frantic, wild affair; everyone piles in and starts digging, and you pull out nuggets the size of turnips and you become blasé. And then you begin to work through your stake and the rewards are harder to come by and your focus switches from nuggets to grains. Nevertheless, once you have been panning away for a week in the rain and you find the smallest speck of pure gold, the thrill is just as great as when you plucked nuggets with alacrity.

I knew that there were a fair few motorbike pictures in my family photographic collection. My father was a great motorbike enthusiast and I absorbed the names of the great British marques along with my bottles of post-war NHS orange juice: Ariel, Triumph, BSA and Royal Enfield. I sorted through my imaginary folder of motorbike images (I dream of being so organised, but it is nothing more than a dream) and most of the nuggets had been featured at some point before on Sepia Saturday, Motorbike Monday, Sidecar Sunday or the like.

My panning in the rain was eventually rewarded with this photograph which had obviously fallen through my sifting pan on previous occasions because it was small and easily overlooked. A quick scan and clean-up reveals it in all its glory, and it has immediately become my favourite photograph of my parents - Albert and Gladys. I think the house in the background will be their house on Cooper Lane, Bradford, and that will date the photograph at about 1936 or 1937, shortly after they got married. The star of the photograph is, of course, the Royal Enfield; but it is also the look of pride and joy in the faces of the riders.

To see more sepia nuggets go to the Sepia Saturday Blog and follow the links.