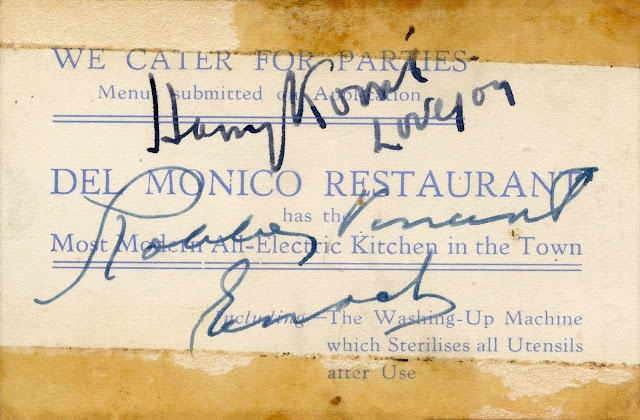 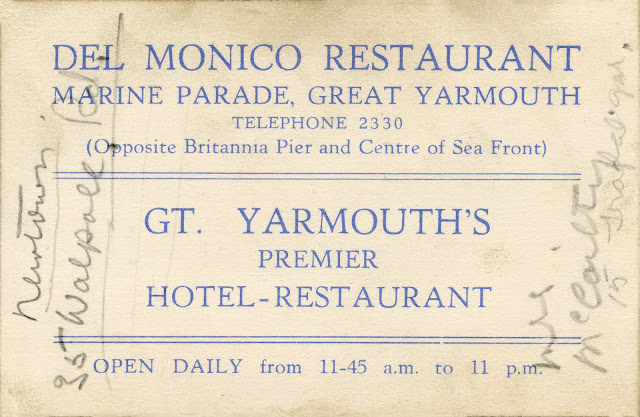 I found this old business card stuck at the end of one of Uncle Frank's photo albums. At first I was attracted by the claim "Including - The Washing Up Machine which Sterilisers all Utensils after Use", which appears to be a somewhat bizarre tag-line for a restaurant. I was then intrigued by a couple couple of addresses for what I would guess are boarding houses in the seaside resort of Great Yarmouth. Finally, my attention was monopolised by the two signatures on the front of the card which appeared to be the work of Harry Korris and Robbie Vincent. Given two such names - which at some point were meaningful enough to get signed on a business card - who could resist the temptation to Google them and discover who they were.  Not me, that's for sure.

Harry Korris (1891-1971) was a British comedian and actor, best known for playing the part of Mr Lovejoy, the theatre manager in the long-running BBC comedy programme, Happidrome. The show was so popular, in 1943 it was turned into a film of the same name. Robbie Vincent (1895-1968) also starred in Happidrome, where he played the bellboy, Enoch. The third permanent member of the show was Cecil Fredericks (1903-1958) who played the stage manager, Ramsbottom. Together the three of them performed their most famous song We Three. You can see their performance on a classic clip available on YouTube. Quite where Cecil Fredericks was that night when Uncle Frank was dining in Del Monico Restaurant in Great Yarmouth is a mystery. Perhaps he was ill - fallen victim to a bug caught off a contaminated kitchen utensil.