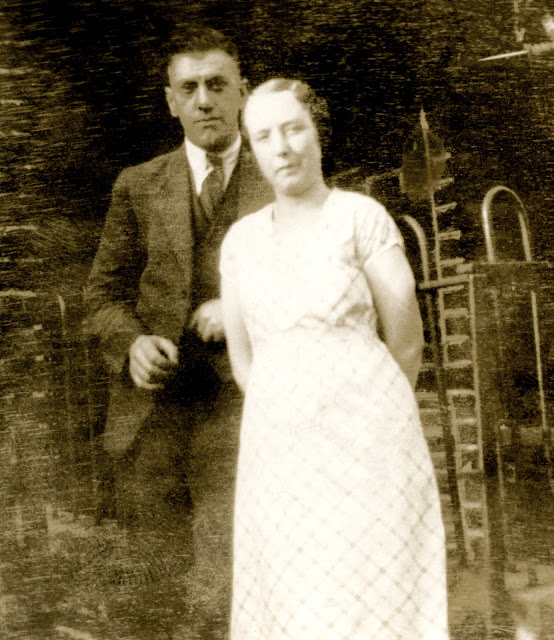 Phrases such as "the dignity of work" occasionally slip too easily off the nib of a pen or the click of the computer keyboard: and I am as guilty as anyone in this respect. Standing around in today's photograph are Wilf and Amy Sykes, my uncle and aunt. Wilf was born in Pontefract in October 1903, the son of a police inspector. Following a lengthy period of training he became a woolsorter in, what at the time was the wool and worsted capital of the world, Bradford. As an apprentice-trained woolsorter, he was part of the aristocracy of labour - his skills were in demand and pay was good compared to the rest of the industry. Along with his fellow sorters he would be responsible for examining and grading the wool fleeces that came to Bradford from throughout the world. This would be done by touch and visual examination, and a skilled sorter could quickly determine which part of which fleece would be most suitable for high quality yarn or shoddy scrap. The job, quite literally, involved standing around and examining wool fleeces.

Although the job sounds as safe as the houses Amy and Wilf are standing outside, this was anything but true. During the nineteenth century it became apparent that wool sorters were falling victim to a disease that resulted in bronchitis, pneumonia, and a form of blood-poisoning which created open sores on the skin and a painful sudden decline in the victim. This rapidly became known as "Woolsorters' Disease" and "La Maladie de Bradford". Eventually it was discovered that these industrial diseases were, in fact, Anthrax - a deadly diseases contracted from contact with the spores of the bacterium "Bacillus anthracis" which were from infectious animal products.

Wilf died in 1963, in his sixtieth year. Whether his death was directly related to the work he did, I am not sure, but it seems likely. If it was work that reduced this solid and strong-looking man to the invalid he became by the time of his death, there is nothing at all dignified in it.
at August 28, 2017