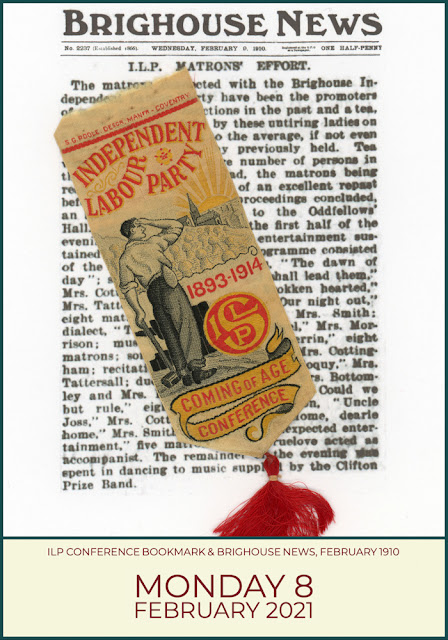 Someone was saying to me the other day that they had just been to a Labour Party meeting (virtually, of course) and it had seemed terribly old fashioned - like something from the nineteen seventies. That's nothing, said I in the way only annoying old men can, when I was a lad, Labour Party meetings were positively antediluvian. Reading a copy of the Brighouse News from February 1910 a couple of days later, I came across a report of a meeting of the Brighouse Independent Labour Party (its complicated, but the ILP were at the time affiliated to the wider Labour Party), which seemed to prove my point. It brought back fond memories to me, but surely even I cannot be old enough to remember going to political meetings in the run up to the Great War!. If that is the case, however, how come an embroidered silk bookmark from the 1913 ILP Conference fell out of the back of one of the books I was reading recently? 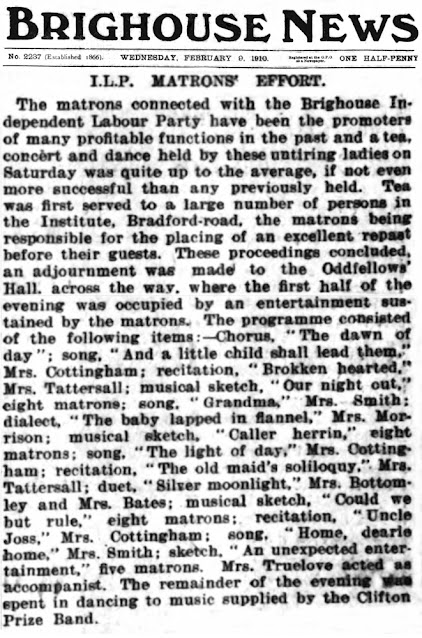 ILP MATRONS' EFFORT.
The matrons connected with the Brighouse Independent Labour Party have been the promoters of many profitable functions in the past and a tea, concert and dance held by these untiring ladies on Saturday was quite up to the average, if not more successful than any previously held. Tea was first served to a large number of persons in the Institute, Bradford Road, the matrons being responsible for the placing of an excellent repast before their guests. These proceedings concluded, an adjournment was made to the Oddfellows' Hall, across the way, where the first half of the evening was occupied by an entertainment sustained by the matrons. The programme consisted of the following items:—Chorus, "The dawn of day"; song. "And a little child shall lead them." Mrs. Cottingham; recitation. "Broken hearted." Mrs. Tattersall; musical sketch, "Our night out." eight matrons; song, "Grandma," Mrs. Smith: dialect, "The baby lapped in flannel." Mrs. Morrison; musical sketch. "Caller herrin," eight matrons; song. "The light of day." Mrs. Cottingham; recitation. "The old maid's soliloquy," Mrs. Tattersall; duet. "Silver moonlight." Mrs. Bottomley and Mrs. Bates; musical sketch. "Could we but rule." eight matrons; recitation " Uncle Joss." Mrs. Cottingham; song, "Home. dearie home," Mrs. Smith; sketch, " An unexpected entertainment," five matrons. Mrs. Truelove acted as accompanist. The remainder of the evening spent in dancing to music supplied by the Clifton Prize Band.
at February 08, 2021