I eventually get down to the bottom of Uncle Frank's Brown Suitcase and discover the hoped-for cache of coins. But, on examination, they are a pretty pedestrian lot. There is a 1933 Half Crown (I had forgotten what a heavy coin these were, how on earth did our pockets survive), a two shilling piece from the year of my birth, a modern-day 2p piece, and an old silver 3d bit. With them there is a commemorative medal, produced in Bradford in 1897 to mark Queen Victoria's Diamond Jubilee. On one side there is the usual stern portrait of the Queen, on the other a relief portrait of the Mayor of Bradford - Thomas Speight - and what I can only assume is his wife. 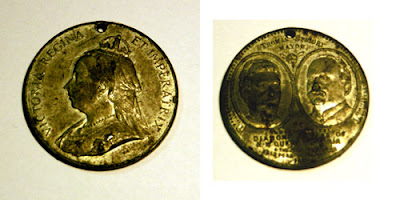 Bruised and battered as it is, I think this is an interesting find and I quickly Google it and determine that there are a few others already on display on the internet. I take it in to show my wife and son, knowing that they too will be fascinated by this piece of social history.

"Is it worth anything", asks my wife as she enjoys a Sunday morning lie-in. "Well it has great value as an illustration of the power of late Victorian civic pride and the determination of municipal dignitaries to portray themselves as a kind of local extension of the ruling aristocracy", I reply. "Yes, but is it worth anything", Isobel asks. As far as I can tell, she has still not opened her eyes and is displaying one of her most extraordinary skills - the ability to sleep and hold a conversation at the same time. "Well, I did notice that there were a couple of these already for sale on e-Bay", I reply. Her eyes open and she surveys the coin with interest, no doubt converting in in her mind to anything from a new pair of shoes to the swimming pool she spends much of her life fantasising about. "What's the current bid", asks Alexander, my son, as he reads the sports pages whilst perched on the bottom of the bed. He knows about e-Bay and therefore is not mesmerized simple by the fact that a medal has made it onto the virtual auction floor. "One, twenty five", I reply, somewhat ambiguously. Alexander's attention is captured and even Amy the dog stirs herself from her deep slumber on my side of the bed, scratches her ear and rolls over. Alexander seeks clarification : "A hundred and twenty-five quid?". "No, don't be silly, one pound twenty five pence", I reply. They don't even bother to reply. Within a second Isobel is asleep again and Alexander has returned to the report on the previous day's Wednesday match.

I leave the room, bemoaning a world in which value is always a monetary unit. It is a sad reflection of a world where the most popular television programmes are about making enough money for a slap-up meal by selling all your family treasures and where e-Baying has become a national obsession.

There is a little hole in the top of the medal. I find some string and thread it through and hang it around my neck. This is what it was meant for, this is its true destiny. I wear it proudly for the rest of the day. Then I discover that it is turning my skin green so I lay it to rest in the bottom of a drawer. When my child, of my grandchild, or my great-grandchild eventually clears the drawer out perhaps he or she will be more impressed by this wonderful object that the people of today. Or maybe, the e-Bay price will have gone up by then.