The Relentless Rise Of The Algorithm

Today I would like to let you in to one of the secrets behind the composition of this blog. "How on earth do you think of things to write about?" is a question I am frequently asked at First Nights, Exhibition Openings and Balcony Cocktail Parties. Until now I have responded to such searching enquiries with a shrug of the shoulder and a knowing look loosely modelled on one Alec Guinness used in Episode 4 of Tinker,Tailor, Soldier, Spy. However, before being served with a demand under the Freedom of Information Act, I have decided to tell all. So, how do I decide what to write about? It's quite simple, I use an algorithm. And to prove the point, here is a copy of the algorithm I use. 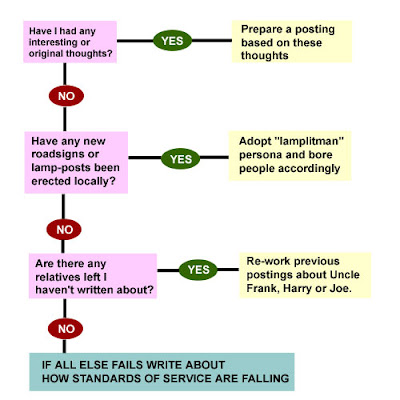 So, having got that off my chest, I would like to tell you about the bloody gas man. For five days now, we have been without heating or hot water. Last Thursday the central heating boiler stopped functioning and any attempt to restart it led to a series of minor explosions. The boiler is comparatively new and covered by a service contract. During the last four years, the gas repair men (oh, all right, the gas and central heating logistic, servicing, and repair operatives) have been to our house so often that its location is now included in the standard induction process for new workers.

When the GCHLSRO arrived - armed with his trusty laptop - he located the boiler and subjected it to what appeared to be (I was looking over his shoulder at the time) a wonderfully complex algorithm. You know the kind of thing : "is the pilot light lit - no - light pilot light; yes - switch pilot light off in case there is a gas leak". After half an hour of this he reported that the bearings on the transmission ventilation fan (or some such thing) were buggered and a new one would have to be ordered. The next day, another GCHLSRO arrived with his laptop, his algorithm, and a new fan. He must, however, have taken a different route through the algorithm, because he reported that it was nothing to do with the transmission ventilation fan bearings but it was the flame converting heat exchanger (or some such thing) which was buggered. A new part would have to be ordered. The weekend intervened. Deprived of baths, showers and heating, my wife visited an old school-friend in Newcastle. My son happily took off to the moors of North Yorkshire in pursuit of a Duke of Edinburgh Gold Medal. Amy (the dog) and I were left behind to get colder and smellier.

It is the algorithm I blame. This belief that what used to be known as skill, experience, judgement and common sense can be replaced by a combination of raw computing power and nursery-level questions is one of the blights of modern life. Behind the nonsense which is NHS Direct sits the algorithm. Behind every inexplicable planning decision, sits the algorithm. No doubt it will eventually be revealed that we went to war in Iraq because of a Pentagon-based military algorithm.

The rise of the algorithm is relentless, and there is little that can be done about it. So here I sit waiting for today's GCHLSRO. Waiting to discover which adventurous route he will take through his merry algorithm.

Now, have I ever told you about my Uncle Wilf?