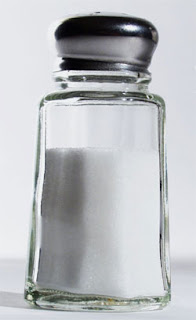 I suspect that I don't really like food. Those who know of my somewhat narrow dietary comfort zone will voice little surprise at this statement. But I am not referring to the range of tastes I find pleasant or acceptable, but to the very process of eating itself. For me eating is a means to an end rather than an end in itself. I know people who genuinely like food - I am married to one - who can devote themselves entirely to the experience, savouring each mouthful, each new carrot being a fresh journey of discovery. I, however, need to do something else whilst eating : watch television, read a book, pick my nose, listen to the Archers - or preferably all four at once. I accept that this makes me a difficult and irritating dining companion but I have reached the "it does exactly what it says on the tin" stage of life : so those not liking it simply have to lump it.

Anyway, I was settling down to my plate of chips last night and desperately searching for something to read. The only thing within reach was a copy of "Hospital Doctor", the Plumber's Gazette of the hospital medicine trade. As I flicked through the pages - avoiding the drug adverts which always seem to feature some smiling middle-aged twit who has just overcome diarrhoea and is living life to the full for the first time in years - I found a feature entitled "Bad Medicine" which seemed to have been modelled on Ben Goldacre's excellent Bad Science column in The Guardian. The Bad Medicine column in the copy of Hospital Doctor I was reading was entitled "Studies Are Not Worth Their Salt". The content of the article - written by a Cheshire GP, Dr Malcolm Kendrick - is neatly summed up in the opening paragraph :

"It appears to be almost universally accepted as a scientific fact that if you eat more than 6g of salt a day, this will significantly increase your risk of cardiovascular disease and premature death. But this "fact" is not supported by one single scrap of direct evidence"

The article goes on to review a number of studies, the majority of which show no correlation between reduced salt intake and improved cardiovascular outcomes. I have neither the expertise nor the time and space to review the arguments. But the very fact that a considerable degree of doubt exists about something which has become one of the shibboleths of the modern dietary movement is cause for concern. It throws the veracity of all those traffic lights which increasingly appear on every food package into even greater doubt.


Reaching for the salt pot I sprinkled an extra layer of salt on my chips. And yes, I quite enjoyed them.
at April 12, 2007