It is now six months since I left behind my involvement in the local organisation of the National Health Service. On the whole, it has been a welcome break from all the problems and conflicts, challenges and choices which characterise the NHS in the twenty-first century. Being no longer involved in the tricky business of making decisions means that I can indulge in what has almost become a national obsession : finding fault with the system and proclaiming that it is no longer effective. It is easy for us to be critical : most of us have never known anything else other than the NHS. The NHS and I were both born in the same year (1948) and if - as we approach our sixtieth birthdays - I am looking in better shape than it, it is precisely because of the care and protection that service has provided me with over the years.
I am reminded of some of the alternatives to the NHS in a leaflet I find at the bottom of Uncle Frank's suitcase. It is a 1947 circular announcing the start of the new National Health Insurance Administration and noting that the very limited sickness cover provided by a range of Friendly Societies (in the case of Uncle Frank, the Independent Order Of Rechabites) will be replaced by the new system of National Health Insurance in the course of the coming months. 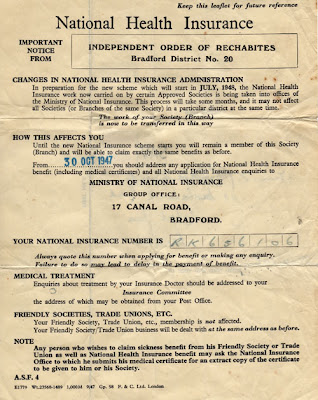 The Rechabites were an interesting organisation. The British Friendly Societies of the early nineteenth century - organisations such as the Oddfellows, Buffaloes, Foresters, and Druids - were self-help clubs for working people. In return for a small weekly payment, limited financial help was provided in times of need. In some cases rudimentary sickness benefits were available and a grant was normally provided on the death of a member, enough to cover very basic funeral expenses. Many of the societies would meet in a local pub or alehouse : the regular local meetings providing an opportunity for collecting the weekly contribution and what nowadays would be called "bonding and networking" over a pint or two of beer. During the mid-nineteenth century a strong temperance movement developed and it was felt that there was a need for an alternative form of Friendly Society - one which still took in contributions and provided assistance at the time of sickness or death but was totally divorced from public houses and all forms of alcohol. The Independent Order of Rechabites came into being in 1835, taking its name from the biblical tribe who were 'commanded to drink no wine' by their leader Jonadab son of Recab, and successfully resisted when tempted to do so.

The Rechabites remained active well into the twentieth century - indeed, as someone will no doubt write in and tell me, they still exist today. But it was the birth of the welfare state - and in particular the provision of free healthcare to all by the new Health Service - which brought about the decline and eventual death of the Friendly Society movement. So as I sit her sipping my glass of wine (I am thus the reprobate of the title) and writing about the Rechabites, I think about the NHS with a new fondness. For all its many faults it is better than what went before.