As I dig down through Uncle Frank's Brown Case I discover little of monetary value, but a wealth of information about the man himself. Leaving aside for a moment Uncle Franks' rather eccentric collecting habits, the things that people of his generation kept draw the ink outlines of their lives. The colour and rich texture may be missing, but the birth certificates, death certificates, Post Office Savings Books, Wills, and School Reports provide a necessary framework upon which a life story can be constructed.
So what have we discovered? Frank Fieldhouse was born in Lidget Green, Bradford in 1912. His father - Wilson Fieldhouse - was a railway clerk whilst his mother - Clara Ann - was a housewife. It is unclear whether Wilson and Clara had other children, but I do seem to recall mention of a sister, and an Ada Fieldhouse was a witness at his wedding. Frank attended Grange Road Boys' Secondary School between the Autumn of 1922 and the Summer of 1927. It would appear that before the war he worked as a shop assistant. During the War he worked at the Royal Ordinance Munitions Factory at Boston Spa and therefore one suspects that he picked up some engineering skills along the way. He was married to Miriam - my fathers' sister - in 1942 (he was 30 whilst she was 41). However, they must have known each other for some before, for there is evidence that they went away to Blackpool on holiday together in 1935. At various times they lived in Bradford, Lowestoft in Norfolk and Basildon in Essex. At the time of his death in 1971 -aged 59 - he was working as an Inspector at the Marconi Factory in Basildon.
This then is the framework. To begin to get an impression of the man himself one needs to look at the evidence more carefully. The brown case contained his "Report Book! from the Grange Road Boy's Secondary School. 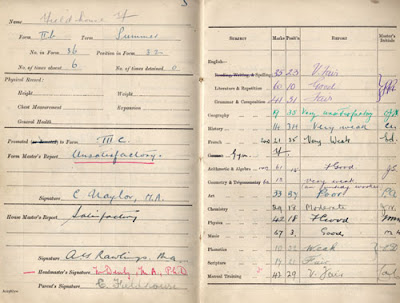 As well as telling us a good deal about the young Frank - he was good at maths but very weak in subjects such as history and geography - the Report Book tells us a lot about the education system in the 1920s. First, it should be noted that Frank was at a Secondary School which was somewhat unusual for a working class boy of the time. I can't think of one member of my own family who went to secondary school - they all left Elementary School at the age of thirteen or fourteen. At Secondary School Frank was exposed to subjects that would have been unknown to many of his contemporaries. Chemistry, Physics, French, German, Trigonometry were all the preserve of the minority who were educated passed elementary level. 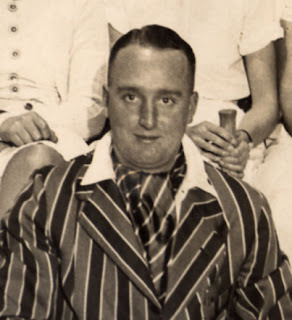 Even in this preserve of the better-off working class - where the need to get a child working as soon as possible could be resisted - the shadow of poverty can still be detected. There is a prominent place for the "Physical Record" which notes such factors as height, weight, chest measurement and general health. This was less than ten years after the First World War when it was discovered that a large proportion of the working class recruits were physically incapable of meeting the minimum health standards of the British Army. Malnutrition was still a problem and the Report Book reflects the vigilance of the school system in working class areas.

And now, eighty years later, the schools are once again thinking of introducing a "Physical Record" section to report cards which will record weight and body mass index. The reason for vigilance has, of course, changed. Glancing at the photographs of Uncle Frank in his youth it is clear that he was, once again, ahead of his time.