News From The Balcony 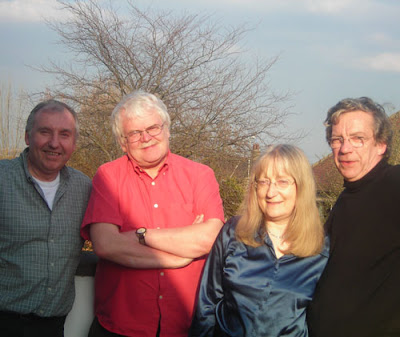 The paint may have still been wet on the balcony rail and the cocktails might have had a passing resemblance to a mug of tea and a glass of beer but the first ever News From Nowhere Annual Cocktail Party took place in Fixby, Huddersfield on Saturday 7th April 2007. All four authors - together with nearest and/or dearest - attended the event which was described in a press release as the greatest coming together of literary talent since the disbanding of the Algonquin Round Table in 1929. The moment was captured in the above digital image which shows (from left to right) the suitably shadowy figure of dph (the Alexander Woollcott of our little circle); Alan Burnett (who has a passing resemblance to a portly Harpo Marx), Jane Gordon-Cumming (Dorothy Parker, who else) and Edwin Osborn (may I suggest Robert Benchley).
The world is not yet ready for the witty repartee which flowed like syrup-of-figs around the dinner table. But such a good time was had by all, nobody has found the energy to post to the blog for the four days following the event. So it is perhaps a good thing that the Round Table will not gather together again until 2008.
at April 10, 2007