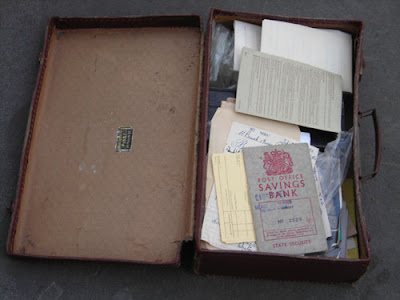 As preparations move ahead for 2007 Skip Week a small brown suitcase is discovered in the garage. It is the kind of suitcase World War II refugees carried : made of compressed cardboard and stitched with rough cotton. I have a vague memory of acquiring it. It belonged to my Uncle Frank and I inherited it on the death of his widow, my fathers' sister Miriam. At the time, I did a quick inspection of the contents and discovering that it did not contain a stash of five pound notes consigned it to the garage where it has remained almost undisturbed for a quarter of a century. It is time to undertake a careful excavation of the contents. To understand how interesting this might prove to be, one needs to know a little bit about Uncle Frank. 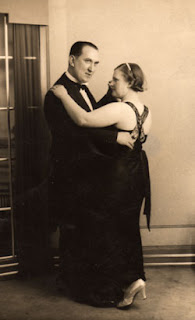 Uncle Frank was a big man. He was a determined collector of almost anything. I remember coming across a box once which contained all the bus tickets he bought whilst travelling to work in a munitions factory in the 1940s. He was an early enthusiast of tape recorders and the purchase of his first reel-to-reel tape recorder coincided with the launch of commercial television. He therefore decided to make a sound recording of every advert that appeared on TV. I remember as a child seeing this mahogany cabinet within which he stored what must have been hundreds of tapes. If they had survived they could have formed the basis of a national collection and they would have been worth a great deal of money. But on his death in the early 1970s, the tapes were thrown away and the cabinet became a store for tins of dog food.

He was not a rich man. He worked as a shop assistant in Bradford in his youth and later as a factory storekeeper (an ideal occupation for a collector). Thus it is highly unlikely that the case will contain anything of value. But one thing you can guarantee : it will contain the unexpected. So join me over the coming few days whilst I investigate the strange case of Uncle Frank's brown case.