At the bottom of the suitcase there is a cardboard box, inside of which are what are obviously the most treasured possessions. There are 42 rusted keys which I think about throwing away but - being me - save just in case I ever find what they are designed to open. This behaviour is indicative of a personality type and I briefly consider writing an article for Psychology Today on it. "Human beings can be divided into two types : those who collect objects hoping one day to find the keys to unlock them, and those who collect keys in the hope ...." I get bored with the idea and dump the keys in a drawer with the Queen Victoria Diamond Jubilee medal. There is a badly crumpled Spanish 5 pesetas banknote, a somewhat stained set of coins in a plastic wallet entitled "Britain's First Decimal Coins (didn't everyone's Uncle Frank have one of these?), and a couple of ancient torch bulbs. There is also a small canvas bag which is labeled "From Yarmouth, where the silv'ry sands stretch far as eye can reach, accept this little sample of the beach". Of course, if I was a true detective I would cut the bag open and hidden amongst the sand I would find the uncut diamonds. But I'm not, so I don't. 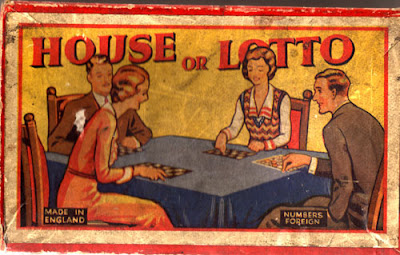 So that is it then. Uncle Frank's legacy. The most interesting item amongst the lot of them is the cardboard box which portrays a wonderful 1930s middle-class group playing lotto. For a moment I think about writing an article for "Collectors World" on why what we choose to put our collections in is potentially more valuable than the collections themselves. But I don't.
And then, as I am putting the box away, I notice that there are two "bottoms" to the box, one inside the other. Separating them I find a letter between the two. It is very short and addressed to "Miriam" which will be Uncle Frank's wife. It is dated June 1971 which would be shortly after Uncle Frank died. It comes from an address in Stockport, and it reads as follows:
"Dear Miriam,
Thank you for nice letter. I am sorry you are so bitter against me. Anyway I enclose P.O. for 50p (10/-) and will send it every week. That is all I can do for the time being. Will send more as soon as I can. Yours truly, Ada F".

So there was a story after all. Could this Ada F be Frank's sister who was a witness at their wedding. Why is she paying what were quite considerable sums to Aunty Miriam? Why was Aunty Miriam bitter? So, the suitcase provides no answers but plenty of questions. I think about writing an article for "Philosophy Now" on how our search for answers merely results in more questions. But I decide to challenge my son to a game of lotto instead.
at April 25, 2007