Father And Mother On Front At Blackpool (In Hats) 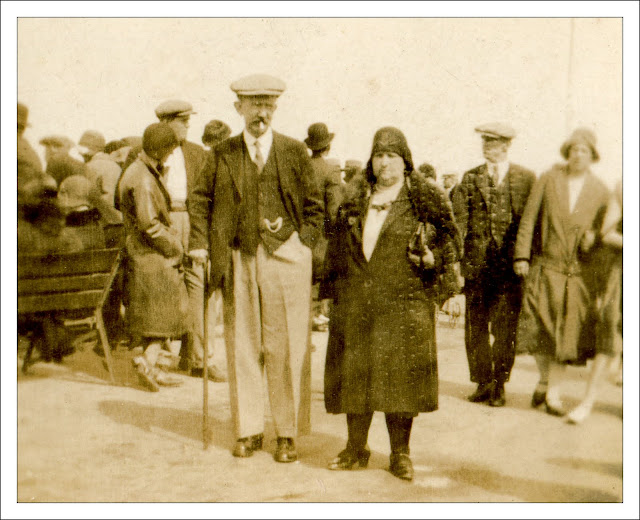 Cut to the quick by the oft-repeated suggestion that I somehow choose the weekly theme photograph in order to neatly fit in with an old photograph from my collection which I am wanting to feature in my weekly post, I am, this week, eschewing all pretense of theme-following. Instead, I am going with a random photograph taken from one of Uncle Frank's old photographic albums. The photograph is carefully entitled, in Uncle F's neat script, "Father And Mother On Front At Blackpool".

Quite clearly this is Blackpool, Lancashire and not New York, New York and therefore I can't be accused of somehow cleverly following up on the still from the 1912 film "The New York Hat" which served as the theme photo this week. Equally, charming though Uncle Frank's mother undoubtedly was (I regret to say that I never had the pleasure), nobody would suggest that she was as beautiful as the young Mary Pickford (yes, it was she in the theme photograph). So, there you are, a completely random and non-thematic photograph ...... which just, by chance, seems to feature rather a lot of hats. 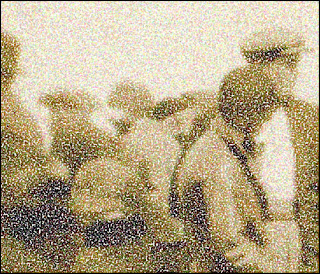 On seeing that flowing collection of headgear on the left of the image, my first thoughts were of the French artist Georges Seurat and his pointillism paintings. Photoshop does provide a pointillism filter and this seemed an ideal opportunity to use it and the results, I believe, suggest that Frank's mother and father might well have been holidaying in Blackpool with the French post-impressionist towards the end of his career.

I keep calling them Frank's mother and father, but they had names and identities and stories of their own. I could look them up on the census form, but I suspect that the formulated data wouldn't convey half as much about them as this one picture. The picture of Franks' father and mother on front at Blackpool, in hats.