The Fat Dog Heads For The Big Apple (Again)

It is over a week into the New Year and my resolutions are dropping like .... (well I will go no further as one of my resolutions was to be less uncouth this year). Anyway, they are falling by the wayside. So far I seem to be eating more and walking less, being a less reliable and more unresponsive blogger, and wasting time as though it  was as bountiful as sand in the Sahara. I am just managing to cling on to my daily target for the completion of the Great Novella Of the 21st Century (GN21), but I feel I am losing my grip. So in search of redemption I take Amy for a walk and, as promised, we return to our virtual walk from Los Angeles to New York City. I started this project years ago : the idea being that I would record the distance I walked my poor dog around the mean, grey streets of West Yorkshire and, using Google Earth, translate the distance traveled into a virtual walk across the continent of America. For the last year we have been grounded in the small Oregon town of Yachats : victims of indolence. One of my resolutions for 2012 was to restart the journey. Here is a report on the progress we made last week.


FAT DOG TO THE BIG APPLE : PART 62 North And South Of Waldport 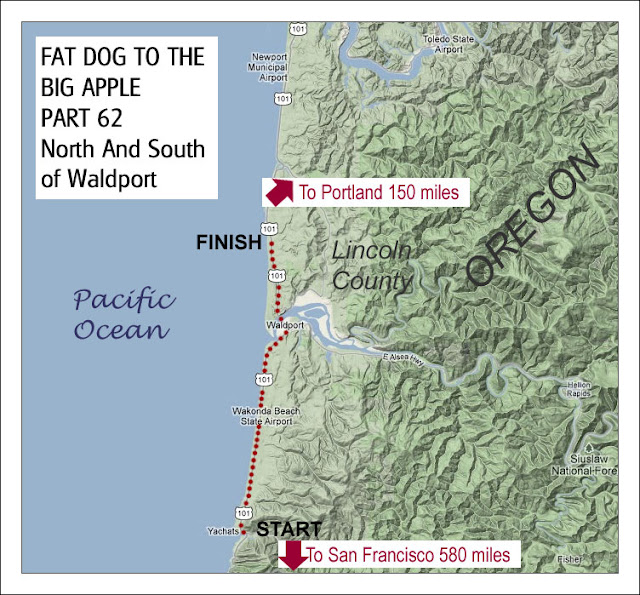 "It is good to be moving again", I said to Amy as - at long last - we left Yachats behind us and headed north along the Pacific Coastal Highway. She didn't respond : the one year of rest and relaxation had done nothing to improve her conversational skills. But, unless I was mistaken, there was a spring in her step as she surveyed the almost endless vista of fresh trees before her. Yachats had been described in the guidebooks as "the ideal place for discovery and renewal, rest, recreation and romance". Looking back over the last year we had discovered little and renewed less, although on the romance front Amy had increased her affection for chicken. Dead chicken that is. Dead chicken that have been carefully cooked to preserve their moist flesh.

As we walked towards the town of Waldport, I settled back into the rather pleasant routine of walking two or three miles a day and gazing out onto the Pacific Ocean rather than the frost-covered slopes of Huddersfield Crematorium. I was rediscovering the joys of virtual dog-walking and I took the opportunity to remind Amy of our mission. "If we walk in a straight line, it is only about 2,621 miles to New York", I happily told my dog, "and at our current rate of progress we should make it to the end by sometime in 2016". I was explaining to her that even with a few planned diversions along the way, we should still see the Empire State Building by the end of the decade when I noticed that she was up to her old tricks and pulling on the leash.

Now I realise that Amy is a dog and that she doesn't always understand what I am saying, but she keeps providing evidence of an understanding which belies her canine status. This was one such occasion. She was dragging me through the gate which led to Wakonda Beach State Airport. Now I have to admit that I would not have been adverse to a helping hand along our way, and I can cheat as well as the next man, but this was little more than a muddy field and there was no way I was going to bump along its rutted surface at 100 mph in the hope of becoming airborne. 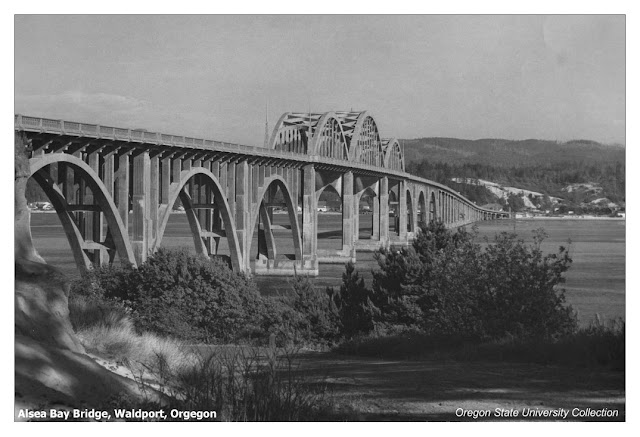 And so we trudged northwards and eventually arrived at Waldport. Amy was sulking big-time and I was nursing a blister on my foot. I made a list of ten things to look forward to in order to cheer the pair of us up, but got stuck when I had got to number four. There were a few decent brew-pubs listed for Waldport, and a dog-food supply company: but if you add that to the fact that it wasn't raining and that neither Amy nor I had toothache, that was about the extent of our good-time audit.

"Never mind", I said to Amy, "we have the open road ahead of us and a continent to see".  Amy had started to walk a little awkwardly : if I didn't know better I would have thought that she was trying to thumb a lift.