The "Big U" was the name given to the SS United States, the American built ocean liner which held the famous Blue Riband for the fastest Atlantic crossing during the 1950s. On her maiden voyage in July 1952, the United States crossed the Atlantic in just 3 days, 10 hours and 40 minutes : a record which stands to this day. In part, her speed was due to the use of modern light-weight materials in her construction. Much of the superstructure was made of aluminium giving her a power-to-weight ratio which has never been equalled. During her heyday, publicists would claim that the only wood on board was to be found in the chopping blocks in the kitchens and in the grand pianos.

During the 17 years that she was in-service the United States played host to some of the most famous celebrities of the age. Her guest-list reads like a page from a very select Who's Who : Marlon Brando, James Cagney, Gary Cooper, Salvador Dali, the Duke and Duchess of Windsor, Duke Ellington, Bob Hope, Princess Grace and Prince Rainer, President Harry Truman ... The Big U was home to the rich and the famous. So why was a rather splendid copy of the illustrated Deck Plan of the SS United States one of the first things I came across when I lifted the lid on Uncle Frank's suitcase? 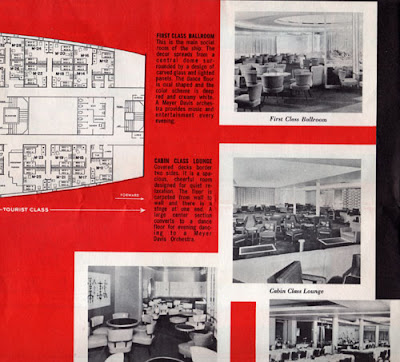 The Deck-Plan provides great detail about the arrangement of the cabins - there was accommodation for 1,928 passengers - and the various public rooms. In comparison to the cruise ships of today (which are about the same size but considerably slower) the most noticeable feature is the segregation between the different classes. Thus there is a First Class Dining Room (with "an air of dignity and distinction" complete with gold threaded curtains and bronze statues); a Cabin Class Dining Room ("a perfect setting for luxurious dining at sea"); and a Tourist Class Dining Room (a "charming atmosphere" decorated in warm colours with gun metal mirrors). The decks are segregated with, one assumes, Titanic-like locked gates between the different areas.

The Deck Plan is dated January 1962. This was about the time that Uncle Frank and Aunty Miriam moved away from their native Bradford. To the best of my knowledge they went to live in Bassildon and there was certainly no talk in the family about a visit to the United States (and such a visit would have been so unusual in our family there would have been considerable talk if it had taken place). So where did the Deck Plan come from? And why has it been preserved in the brown suitcase? And what other mysteries are yet to be discovered alongside it?