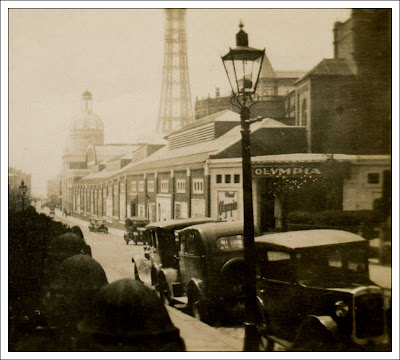 I am in love with images. Although it is a love affair that has been life-long, it is also a love that has grown in intensity as I have grown older. Like a overgrown child I am happiest if curled up in a corner with a picture book and a glass of milk stout.
Take, for example, today's Sepia Saturday image, plucked almost at random from an album of Uncle Franks' holiday snaps. It was "almost" at random because I was determined to become a semi-themer this week so I was looking for something which might feature a storefront, or a group of men, or - if all else failed - a car.
So here is our photograph : let us now read it. Well first of all we have a date penciled on the reverse which is the 26th May 1931, but we probably didn't need the intervention of words to narrow the time-frame down. The tower is the main clue as far as location is concerned : with a tower like that it has to be either Paris or Blackpool. One of the cars is in motion and driving on the left so it is Blackpool and the "Olympia" is therefore the Olympia Exhibition Hall that is at the rear of the famous Winter Gardens. 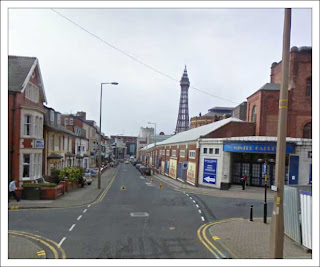 The street therefore is Adelaide Street and we can get a final confirmation of the location by comparing the original image with a Google Street Cam image - as you can see little has changed. But one thing that has changed is the dome that can be seen on the left of the photograph. The Blackpool Olympia Hall was built in 1930 and the dome was demolished during World War II and this gives us our time-frame. The car models would give us final confirmation of a date stamp of the early 1930s.
The Blackpool Winter Gardens complex includes a number of different venues including a theatre, an opera house, a ballroom and extensive conference facilities. Parts of the complex date back to 1875 and elements - such as the Olympia Exhibition Hall - were added to the original building in the years up to the outbreak of the Second World War. 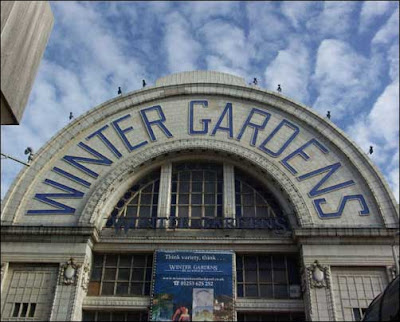 The Winter Gardens still exists today and when I was in Blackpool a couple of years ago I took a photograph of the front of the complex. The whole complex has a rich and varied history. During the First World War, for example, the massive Empress Ballroom was requisitioned by the Admiralty for the construction of the gas envelopes of R33 airships. Excess gas has been a common theme over the years as the Winter Gardens has acted as the main venue of the annual conferences of all the major British political parties. The whole complex is now Grade II listed which means that it should be safe from too much redevelopment. As soon as the sun returns to the sky I think I might take a train to Blackpool and take a walk down Adelaide Street.
Enjoy many other old images by going to the Sepia Saturday Blog and visiting the other participants in Sepia Saturday 65.