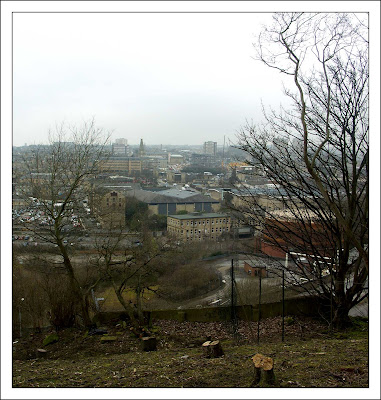 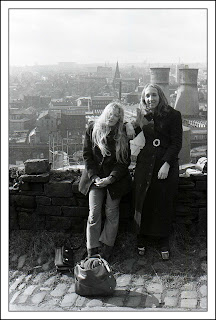 It is always tricky trying to locate the site of old photographs forty years after they were taken. With the picture of Janie and Isobel I featured last week, I had a vague memory of where I had taken it from but as Amy and I walked those streets this morning so much had changed. The cooling towers had long gone and wire fences and car parks seem to have taken over the landscape. But if you look carefully you can still make out the proud statement of the Town Hall spire in the middle distance.
The photograph was taken from half-way up Beacon Hill which watches over the town of Halifax with a kind of half-stated malevolence. It was on this hill where the beacon fire would be lit to warn the town of danger, and it was on this hill that convicts would be occasionally hung to teach their fellow citizens a lesson. The cobbled road you can see in the earlier picture is part of the old Halifax to Wakefield pack-horse route which was known as the Magna Via (or some insist that it was actually called the Alta Via and mis-transcribed from ancient documents). Whatever it was called it still climbs up the hillside with a gradient that makes you pity the life of pack-horses. 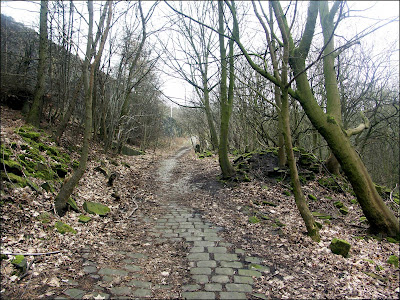