Work, The Budget, And The Price Of Petrol 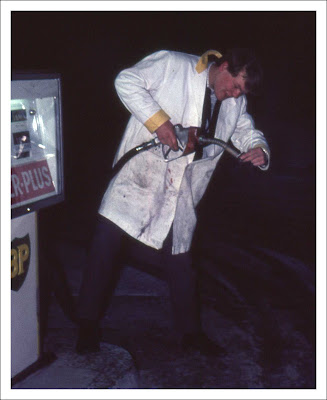 This image is not some wry comment on the price of petrol following the British Budget announcement which will take place later today. It is, in fact, one of the few photographs I was able to find of me working! Dating from some 45 years ago, when I was working as a petrol pump attendant (and when petrol was 25 pence a gallon), the photograph was taken by my brother Roger after he had just called into the filling station asking for his petrol lighter refilling!
I am using the picture to try and explain my comparative absence this week : I am working! Not the kind of work, I hasten to add, that provides you with a fat pay packet at the end of the week or stimulation for your over-addled brain, The kind of work that involves chauffeuring The Lad to and from his current placement at the local hospital, and chauffeuring the GLW to and from the shops during her week off work.
So my apologies for my absence, normal service will, I hope, return very soon. And the way the price of petrol is going at the moment (even before the budget, prices have climbed to about £6 per gallon) it might be that I will have to resign from my role of chauffeur and buy both The Lad and the GLW a bicycle each.
at March 23, 2011