In Memory Of Lady Hermione And A Dark Red Automobile 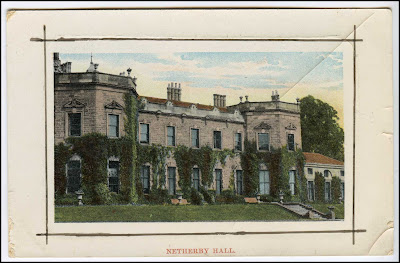 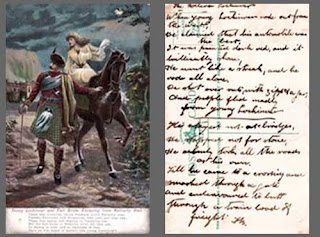 Some of you might remember my Great Uncle Fowler (or rather reading about him). In the first decade of the twentieth century he left his native West Yorkshire and went to work in Longtown in Cumbria. He was an avid postcard collector and his postcard collection was handed down to his niece, my mother, and eventually to me. He never married but there are many references in his postcards to his various sweethearts. He was also a bit of a poet and on the reverse of one of the cards he has penned a new version of Walter Scott's poem "Lochinvar". 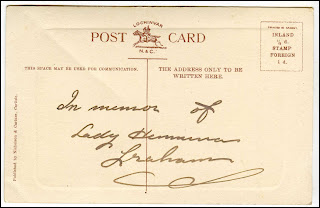 As I dipped into the collection today I pulled out an early colour photograph of Netherby Hall, and it was no surprise to discover that the Hall - the seat of the Graham family - was close to Longtown. The card had not been sent through the post, but on the reverse someone - I assume Fowler - had written "In memory of Lady Hermione Graham" Lady Jane Hermione Graham (1832 - 1909) was the eldest daughter of the famous Whig politician, Edward Seymour, the 12th Duke of Somerset, who married Sir Frederick Ulric Graham of Netherby in Cumbria in October 1852.
Now it might be that Fowler, at the time in his mid-thirties, just wanted to record the passing of a local celebrity. Or was he perhaps thinking of that poem he penned a few years earlier, that updated version of Scott's Lochinvar. In the original version, dashing Young Lochinvar ran off with the fair bride of Netherby Hall. By the time Fowler penned his version the Lady of Netherby Hall was no longer young or fair or a bride, but perhaps, with the aid of a new automobile that was "painted dark red, and it brilliantly shone", the deed could still be accomplished.
at March 01, 2011