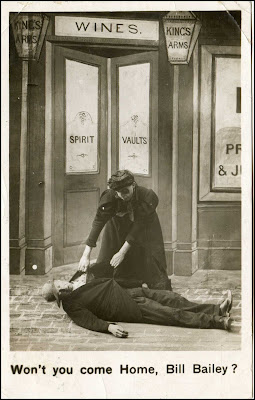 It was a heavy night at the pub last night. It was my turn to do the questions at the pub quiz which meant a lot of talking, indeed a lot of shouting. Ergo : a lot of drinking. So I feel a degree of sympathy with poor Bill Bailey as featured in this postcard which comes from my vintage postcard collection.
I have been dodging the Sepia Saturday theme that is set by whichever idiot chooses these things for weeks now. But given that this week he chose a public house as his archive image, and given my well-known love of public houses, I felt I had to respond. The problem is that I come from a long line of abstainers : my family tree has been watered by nothing stronger that sweet tea and glasses of dandelion and burdock. There was Uncle Harry I suppose, but the less said about that, the better.
I eventually found this card which ticks all the boxes. It features an old photograph, which features a pub. I am not sure where the card came from. I suspect I must have bought it at some stage, I can't imagine Great Uncle Fowler giving it album space amongst the hand-tinted views of Keighley Town Hall and the sweet smiles of Music Hall starlets. It is not particularly easy to interpret the back of the card : it was sent either to a Mr Munford who was a butcher who lived on Newhall Road, Sheffield, or to a Mr Munford Butcher who lived at a similar address. And what is M being told to remember? Let us simply imagine that the sender of the card was feeling a little delicate and intellectually disorientated at the time. A little like I am now. 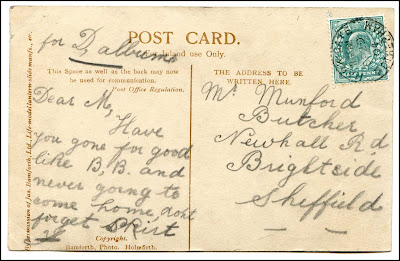 Who was Bill Bailey, I can hear you all asking. The card was sent in 1904 which was when the song, "Won't You Come Home Bill Bailey" was at the height of its popularity. Written in 1902 by the American songwriter Hughie Cannon, Bill Bailey has been a much recorded song, with covers by such great singers as Ella Fitzgerald, Bobby Darin and, of course, Louis Armstrong. But as for who Bill Bailey was, I have no idea and it would seem that few others have either. But whoever he was, whichever darkened room he is seeking refuge in, let him understand this - I know how he feels.
Raise a glass in celebration of the other participants in this weeks' Sepia Saturday. You can find links to all their posts on the Sepia Saturday Blog.